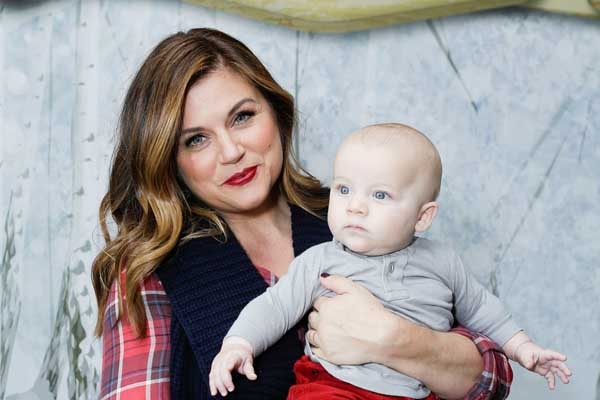 Tiffani Thiessen, the amazingly gorgeous actress, married her longtime boyfriend Brady Smith on 9 July 2005. To date, they are happily married and are living a comfortable life with their two kids. Together, they have a son named Holt Fisher Smit and a daughter Harper Renn Smith.

We all know how much of a wonderful and fun-loving person Tiffani is, but did you know she is an equally awesome mother. She takes really good care of her two kids and adores spending time with them. Little Holt can be seen spending a chunk of his time with his mother, and we must say he enjoys every bit of time he spends with his mother. Their pictures show how much of a great bond the mother-son duo shares.

Furthermore, mother Tiffani takes her children to beaches, parks, and amusement parks where they can be seen having a whole lot of fun. Not only that, but the family of four can also be seen on movie premieres.

Tiffani once said a line from a movie that, we thought we were having fun, but we were making memories, and that’s what their day to day life is. It’s fun, it’s adventurous, and most importantly, it’s memorable.

Life is good when you have an amazing mother, but it becomes even better when you have a dad like Brady, why? To put it in a simpler way, mom loves having fun when it’s time to have fun, but dad, oh boy, you are up for a fun time anywhere and anytime with him. He even makes boring breakfast fun and enjoyable with a song and a little attitude.

Apart from that, he takes little Holt for hiking, swimming, horse riding, and skiing. Not only that, but Brady also takes his son to park where he can be seen enjoying the swing with his lovely sister Harper. We must say Brady is an awesome dad who surely knows how to make his kids’ childhood memories. And if you are wondering how? Then let us answer that for you. During one Halloween, Brady cosplayed as a zombie and was so much in his character that he didn’t even hesitate to run into a pole. It was a memorable moment for his son, who was dressed as an army officer at the time.

Plus, weekends are also awesomely fun with father Brady as Holt and Harper can be seen enjoying some quality time with him. They usually end up drawing, playing around the park, and reading books.