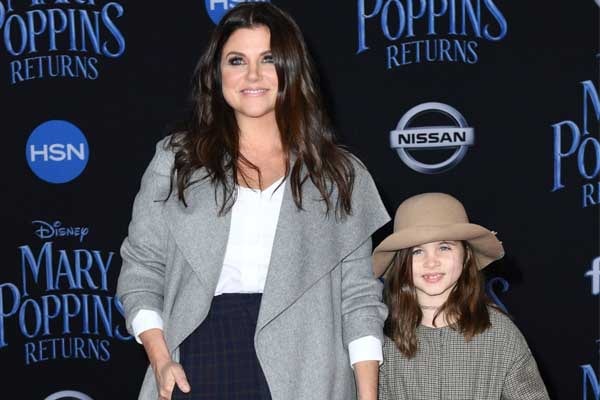 The amazingly gorgeous actress Tiffani Thiessen who made us fall in love with her through her portrayal of Kelly Kapowski in Saved by the Bell married Brady Smith on 9 July 2005. Together the pair is parents to two wonderful and lovely kids, Harper Renn Smith and Holt Fisher Smith.

Tiffani Thiessen’s daughter Harper Renn Smith was born on June 15, 2010, while her son Holt was born on July 1, 2015. At the time of birth, Harper weighed eight pounds and three ounces. She is the only daughter of the couple and their firstborn, so it’s obvious that they share a special bond with her. She is her mother’s little angel and her father’s little princess. That said, let’s get to know a little something about Harper Smith.

To fans of Tiffani, it must come as no surprise that her daughter has inherited her beauty and her gorgeous blue eyes. Tiffani Thiessen’s daughter is like a mini-version of herself, and we are not only talking about looks but also interests. Like mother Tiffani, Harper is also a huge fan of Andy Grammer. The mother-daughter duo loves singing his song together, and we must say they are pretty good at it.

Furthermore, the mother-daughter pair walked hand-in-hand down the runway at the 11th Annual Rookie USA Fashion Show. They rocked Levi’s looks for the show while little Holt was seen supporting his elder-sister and mother from the side of the ramp. Tiffani’s daughter might be young, but she is no stranger when it comes to modeling as she had previously posed for Gymboree’s Olivia line.

Speaking of their personal interest, the pair is also a huge fan of the Remembering Lions series. It is a Wildlife series of charity books and features a foreword by Jonathan Scott & Angela Scott. They simply are very much alike, and they do love spending time with one another, enjoying each other’s company.

Everyone knows how much of a fun-loving guy Brady is. So, it’s no surprise that he loves having fun with his kids. He can be seen cycling with his children and playing basketball with them. Harper and Brady can also be seen shopping for his beer, and oh boy, it’s fun finding daddy’s beer. He is a humorous guy and loves having a fun time with his kids wherever and whenever he can.

In addition to that, daddy Brady loves spending time with his little princess. Although he has quite a busy schedule, he often takes breaks from work so that he can enjoy some quality time with his daughter. He is a lovely father and a good friend to his kids, and we are sure his kids agree with us that he is an amazing dad.

It”s obvious that Brady Smith’s daughter is a lovely girl and a kind one too. It’s all thanks to her parents as they are the ones who taught her to be such a wonderful and generous person. The family of four is just perfect. They enjoy life to it’s fullest and every holiday is something new, something exciting. Also, with such a perfect family, it’s for sure that they have a wonderful time together.

Furthermore, little Harper is also good friends with Mario Lopez‘s children Dominic Lopez and Gia Francesca Lopez. They can be seen having fun playing in the back yard of the house or sometimes indoors. Harper is a beautiful girl, a lovely daughter, and a good friend who loves having fun and enjoying life with her family. Not only that, but Harper is also a loving sister who adores her brother. She takes care of him and, most importantly, shares a strong bond with him.