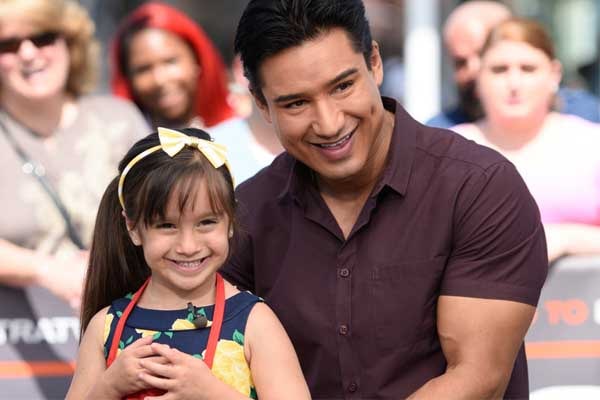 Do you know our favorite American actor and entertainment journalist, Mario Lopez Jr. is a father of three? However, before getting to know his kids, let’s know a little something about him. Mario exchanged vows with his beau Courtney Lopez on the 1st of December 2012 and are still going strong.

Together the couple is proud parents of three gorgeous children, two sons named Dominic Lopez & Santino Rafael Lopez and a daughter named Gia Francesca Lopez. His daughter Gia is the oldest amongst the kids, and oh boy, she is lovely, just like her mother. In fact, she has inherited both of her parents’ good looks and their charming nature. That said, let’s get to know more about Mario Lopez’s daughter Gia Lopez.

His First Born and Only Daughter

Born on September 11, 2010, in Burbank, California, Gia Lopez is the eldest child of Mario and Courtney Lopez. At the time of her birth, she weighed six pounds and four ounces. Father Mario and mother Courtney were overjoyed when they first saw their daughter, and the lovely pair said that they will cherish that very moment for the rest of their lives.

Being the only daughter, Mario shares a special bond with her. He is a really cool dad who loves to have fun with his children. We can see the family of five enjoying their time on Tv shows and the red carpet. Being a celebrity’s daughter, Gia has got the opportunity to meet various big shots of Hollywood like Dwane Johnson, Brad Pitt, Leonardo DiCaprio, and many more. Plus, little Gia sometimes steals the show as she takes interviews of the actor at the red carpet.

Mario is most of the time accompanied by his better-half but, on special occasions, he brings his kids alongside him. Especially his daughter, father Mario spends a chunk of his free time with his daughter Gia. The father-daughter duo loves spending time with one another. Father Mario also joined his daughter on one of her school’s program, and the two of them had a fun time dancing together.

Even before she could talk properly, Mario’s daughter made her movie debut as a Tick or Treat Kid in a short movie, The Disappointment of Jonathan Bender. Later on, she voiced Estrella and Young Marisa in the popular TV series Elena of Avalor. If that wasn’t enough to prove she is a talented kid, then you must know she is a gold medalist in gymnastics.

Mario Lopez’s daughter Gia Francesca Lopez often referred to as Gigi, is a wonderful gymnast. Her father is her biggest fan and has uploaded tons of pictures and videos of his daughter, simply mentioning how proud he is of his baby girl.

Being the eldest, Gigi is also the most responsible one. She loves looking after her brothers when her parents are not around. She also shares a special bond with her younger sibling. Her bond clearly reflects from the pictures her father uploads on his Instagram account.

In addition to that, she adores playing with her brothers, not only that, she also teaches her younger brother Nico how to play the piano. Well, they adore one another’s company, and their parents are really proud of how their relationship with one another grows deeper day after day.

The key to a child’s kind and generous nature is a good family. If parents teach you good manners while you are young, then that sticks with you till the end of time. So, it’s obvious where Gigi’s kind nature has come from. She has a lovely family, and we are sure she loves them as much as they love her.

Father Mario and mother Courtney just adore spending time with their kids. Gigi is a huge fan of Frozen 2 so, her father got her Frozen 2 pop Adventures playset, and we can see them having fun playing with that too. Plus, father Mario takes her to watch movies too, and the father-daughter duo is usually accompanied by either mother Courtney or brother Nico.

To conclude, Gigi is a wonderful and brilliant daughter who loves spending time having fun with her family and friends. She is her father’s little princess and a mother figure to her brothers.

Mario Lopez’s daughter Gia Francesca Lopez’s first name Gia is a short form of Gianna, which means God’s gracious gift. Whereas her middle name Francesca is of French Latin origin, meaning French, or a free one.