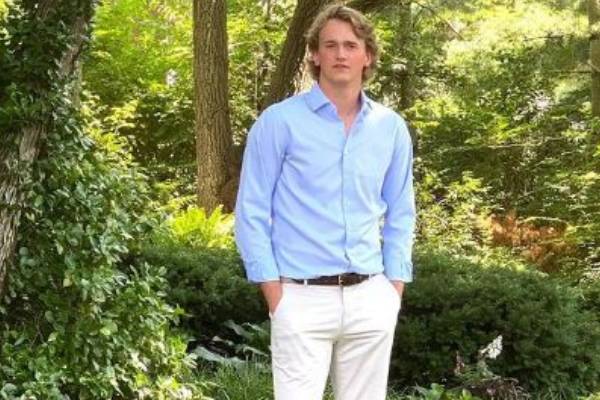 Jack Hunter Pronger is the handsome son of a former Canadian professional ice hockey defenceman, Chris Pronger, and his wife, Lauren Pronger. His dad, Chris, was a senior advisor of hockey operations for the Florida Panthers of the NHL.

Fans and followers of Jack’s dad are curious to learn about him and what he is doing these days. Thus, here are some of the information about Chris Pronger’s son, Jack Hunter Pronger, and his whereabouts.

Eldest Child Of The Couple

Chris Pronger shares a blissful marital life with Lauren Pronger. The couple met at a party in 2000 and began their relationship shortly. After dating for three months, Chris popped the question to her, to which she said Yes!

The engaged couple exchanged the vows in 2001. Since then, their marriage is going strong, and in their two decades of togetherness, the husband and wife became the doting parents of three kids, two sons, and a daughter.

Moreover, Jack is not the only child of his parents. He has a younger brother and sister, with whom he grew up having a great time. Jack Hunter Pronger’s parents welcomed his baby brother, George William Pronger, on June 20, 2004, two years after his birth.

Then, four years later, Jack Pronger‘s baby sister, Lilah Marie Pronger, was born on August 5, 2008, who completed their family. He loves his siblings and enjoys quality time with them. The Pronger siblings have a great relationship with each other.

Is An Undergraduate Student

Jack Hunter Pronger has completed high school. He attended Mary Institute & St. Louis Country Day School and graduated in May 2021. Jack’s parents congratulated him on graduating from his high school.

Furthermore, after he completed high school, Chris Pronger’s son, Jack, enrolled at Southern Methodist University in Dallas County, Texas. However, he has not revealed what his major is. Nevertheless, he probably is doing great in his university and might become successful in any profession that he chooses in the future.

Moreover, Jack’s brother and sister also go to the same high school that he had attended. George is in his junior year of high school, while his sister, Lilah, is in the seventh grade. They seem to be doing great in their studies.

Is A Basketball Player

Chris Pronger’s son, Jack Hunter Pronger, is a basketball player. He played for the basketball team of MICDS Athletics and was selected for the 2019 Ramey Fall League High School awards. While his dad is a celebrated ice hockey player, Jack’s basketball skills are exemplary, and he has gained significant fame and recognition.

Moreover, Pronger might have been scouted by Southern Methodist University as he has committed to the university. Looking at his high school basketball stats, there is a high chance that Jack will find similar success in his collegiate career.

Moreover, we might even see him in the future NBA season if he chooses to play professionally. And if he does, we hope he finds much success and managed to create history as his father did in the NHL. Jack Pronger’s dad was honored by St. Louis Blues as the team retired his No. 44 jersey in January 2022.

On a different note, there has been no news regarding Jack Hunter Pronger’s girlfriend to date. But whoever ends up being his partner will undoubtedly be a lucky person.

Whether he pursues a career as a professional basketball player or chooses a different field, Jack will undoubtedly make his parents proud. And we hope that Chris Pronger’s son, Jack Hunter achieves significant success in his life ahead and opens up about himself in the coming days.

The name Jack has an English origin, which means “God Is Gracious.” Hunter is also of English origin and means “the one who hunts.”