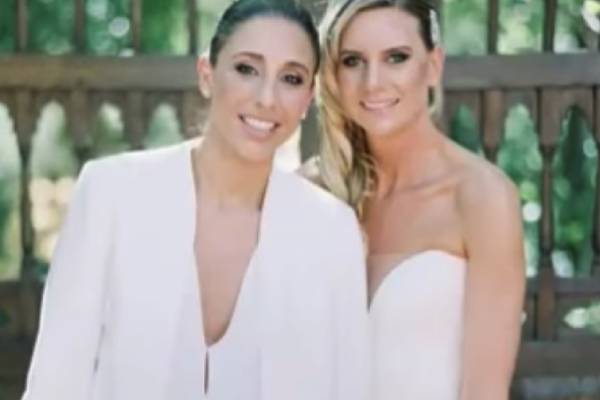 Diana Taurasi and Penny Taylor have been married for almost a decade. Image Source: Social Media.

Leo Michael Taurasi-Taylor is the lovely son of Penny Taylor and Diana Taurasi. His parents, Penny and Diana, are professional basketball players from Australia and America, respectively. They have gained immense fame and fortune in their respective basketball career.

Today, we shall learn in detail about Penny Taylor and Diana Taurasi’s son, Leo Michael Taurasi-Taylor, and see how he is growing up.

As mentioned earlier, Leo Michael Taurasi-Taylor is the son of basketball players Penny Taylor and Diana Taurasi. The couple got hitched on May 13, 2017. However, they have not revealed when they began dating and but they first met in 2004 in Phoenix Mercury‘s training camp. Furthermore, the couple explained that they kept their relationship private but not secret because they didn’t want that to be an issue.

The following year, on March 1, the adorable couple welcomed a baby boy named Leo Michael Taurasi-Taylor. The love birds prefer privacy when it comes to their personal life; as a result, they have not revealed much about their son. However, as per azcentral, Penny Taylor is Leo’s mother which might mean that either she gave birth to him herself or provided her egg for gestational surrogacy.

In one of the interviews, Leo’s mom, Diana, mentioned her experience regarding motherhood. She revealed that little Leo Michael had changed their lives in a great way. However, she also added that there was no book, no advice, no pamphlet that helps in parenthood, and a lot of it was trial by fire.

After welcoming Leo, Diana’s wife, Penny retired to become a full-time mom. The couple is raising their son with immense love and care.

Is Being Raised As A Vegan

Penny Taylor decided to go vegan in 2015. Since then, she has strictly followed her plant-based diet.  Furthermore, in one of the interviews, she mentioned that she did every research to avoid cancer and found a vegan diet was the way. The same year, Diana also switched to the vegan diet.

This might be the reason why the couple decided on raising their kid as a vegan. Moreover, news about Leo’s birth was shared by “Raise Vegan,” a platform that provides information about vegan recipes, videos, parenting, and many more.

The couple has also talked about the effects and pros of vegan diets and has also tried to inspire others to follow the vegan diet. So, it is no surprise that little Leo will grow up on a vegan diet.

About To Become An Elder Brother

Diana Taurasi and Penny Taylor’s son, Leo, is no longer the only child of the couple. According to AZCentral, the couple is expecting their second child in October 2021. Diana mentioned that she and her wife had always wanted a bigger family, where Leo could have a little sister and many little cousins running around.

Furthermore, she also exclaimed that they are excited to welcome their second child. In September, Leo’s mom revealed that he is going to be an elder brother of a sister. Leo might become a great elder brother and will undoubtedly have a great relationship with his younger sister.

His Mothers Are Basketball Players

As stated earlier, Leo Michael Taurasi-Taylor’s moms, Diana Taurasi and Penny Taurasi, are basketball players. Penny Taylor is a retired professional basketball player and assistant coach. During her basketball career, she played for the Phoenix Mercury of the WNBA.

Besides that, she has also played in different countries like Turkey, China, Italy, and Russia. Besides WNBA, Leo’s mom, Penny, has also played in several WNBL championships and has gained significant success, fame, and fortune. She began her WNBA career in 2001 when the Cleveland Rockers selected her in the first round.

After she retired from her basketball career at the end of the 2016 season, she worked as an assistant coach. Furthermore, Leo’s other mama, Diana Taurasi, is a well-known American professional basketball player. She currently plays for the Phoenix Mercury of the WNBA.

She is considered one of the greatest female basketball players of all time and has gained immense fame and fortune. In her basketball career, she has accumulated many awards and accolades, which have helped her make herself well-known worldwide.

Leo might also follow in the career path of his mothers and become a well-known basketball player. We hope that he has a great childhood and an amazing time growing up.

The name Leo has a Latin origin, and it means “Lion.” Similarly, the name Michael has a Hebrew origin, which means “Who Is Like God?”