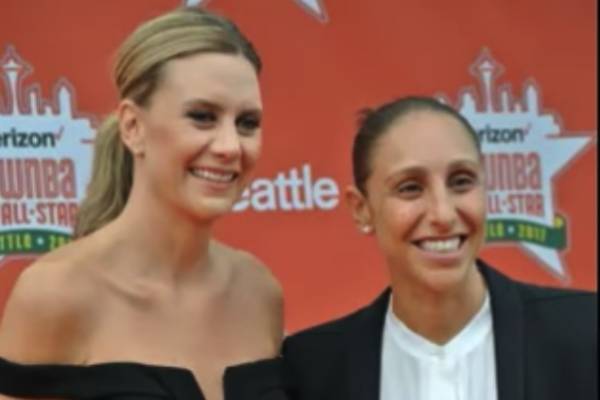 So, today, we have tried to fulfill your curiosity with some facts about Diana Taurasi’s wife, Penny Taylor, and their blissful marital life.

How Did It Start For Penny Taylor And Diana Taurasi?

Aforementioned, the retired professional basketball player, Penny Taylor, shares a blissful marital life with Diana Taurasi. The future girlfriends met for the first time on the first day of training camp in 2004, which was also their first day with the Phoenix Mercury.

Diana Taurasi’s wife recalled what it was like meeting her for the first time in an interview. Penny stated that it was just kind of shocking to see somebody who was that dynamic and energetic. However, despite being enamored at the first glance, their romance didn’t bloom right away. Their relationship blossomed slowly along with their careers.

After dating for few years, the love birds decided to take a step further in their relationship and got hitched on May 13, 2017. News about their marriage came with a big surprise as the duo had kept their personal life secret, away from the unnecessary media attention.

Penny’s wife, Diana, described their wedding as amazing and one of the happiest days they’ve ever had. Penny also added that the day was beautiful with perfect timing, and a real celebration of everything that they’ve been through.

The couple loves each other deeply, and they are enjoying their marital life privately, away from the media and the spotlight. Furthermore, they often gush about each other in the interviews.

Are The Doting Mothers Of A Son

Diana Taurasi and Penny Taylor have been married for five years now. In their five years of togetherness, they have welcomed a son. On March 1, 2018, a year after their marriage, their baby boy, Leo Michael Taurasi-Taylor was born. While azcentral stated that Penny is the mother of Leo, it is unclear if she gave birth to him or only provided her egg for gestational surrogacy.

In several interviews, Penny and Diana have described their experience of being a mother. In an article published by ESPN, Diana mentioned that parenthood is incredible, and she has been talking with some of the people with experience to learn more about how to care for her baby. Diana Taylor’s wife, Taylor, has also talked about her experience of motherhood.

Moreover, the couple, who have been vegan since 2015, has decided to raise their child a vegan. Furthermore, Raise Vegan, a site that has information about parenthood, vegan recipes, and diets, shared the news of the arrival of their son.

Furthermore, in August 2021, the married pair announced that they are expecting their second child. Diana shared their excitement about the new arrival in the Taurasi-Taylor family. Furthermore, in September 2021, Diana and her partner revealed that the gender of their second child. The couple posted a picture of them together and captioned it saying “Baby girl is on the way.”

Diana gushed about how Penny is the best mom ever and added that the way she takes care of their child is second to none to any mother on this earth.

While Penny Taylor is the first spouse of Diana Taurasi, the same cannot be said for Taylor as she has been married before. Before tying the knot with Diana, Penny had tied the knot with Brazilian volleyball player Rodrigo Rodrigues Gil. The former couple walked down the aisle in December 2005, after dating for a few years.

Penny and Rodrigo’s families had flown in from Australia and Brazil to attended the wedding ceremony in Schio, Italy. However, their marriage could not last long and the ex-pair got divorced. Following the divorce, the estranged pair moved on in their respective lives.

As stated earlier, Penny and Diana share a happy marriage, and they both love each other deeply. However, as a private couple, they have not revealed much about their love life and kids.

Nevertheless, we hope that their marriage remains strong forever and they live a happy life.