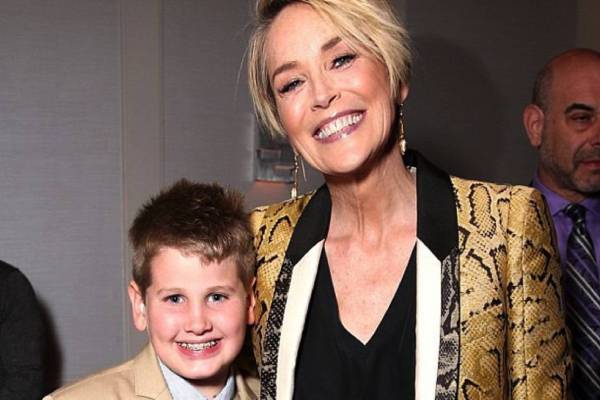 Laird Vonne Stone is well-known as the son of famous American actress Sharon Stone. The producer and former model Sharon is known for her performance as a woman of mystery and femme fatales in many movies and television series. She has gained immense popularity and fortune in her acting career.

Because of the fame that Laird’s mom has gained, he has also gained attention from the world. So, today, we shall learn in detail about Sharon Stone’s son, Laird Vonne Stone, and his whereabouts.

Is The Adopted Son Of Sharon Stone

As mentioned earlier, Laird Vonne Stone has gained huge fame as Sharon Stone’s son. Sharon adopted him in 2005 the same year he was born. According to The Sun, he was born on May 7, 2005.

In an interview with People, she mentioned that she had been trying to adopt a baby for years and didn’t totally believe until Laird was in her arms.

Furthermore, Stone has not revealed anything about Laird’s biological parents. During the time of adoption, she was in London to film Basic Instinct 2: Risk Addiction. From London, she traveled to Texas and then to her home in Beverley Hills.

She named her second adopted son Laird Vonne Stone because “Laird” is the middle name of Stone’s late acting teacher Roy London, and Vonne is her middle name. The actress also mentioned that she had no interest in dating and is more involved in songwriting, directing, and providing the best for her children.

Has Two Other Adopted Brothers

Laird is not the only child of Sharon Stone. He has two other adopted siblings, Roan Joseph Bronstein who now goes by Roan Joseph Bronstein Stone, and Quinn Kelly Stone. Laird’s elder adopted brother, Roan, was born on May 22, 2000, and was adopted in the same year by Sharon and her former husband, Phil Bronstein. He is in his early 20s and has already completed high school.

Furthermore, Roan is a model, and Odda magazine featured him in August 2020. He has also acted in a movie with his mother.

Moreover, Laird Vonne’s younger brother, Quinn Kelly Stone, was born in June 2006, and his mom adopted him the same year as well. Laird has a great bond with both of his brothers, and they spend quality time together.

Presented His Mom With The Mother Of The Year Award

In May 2017, Laird Vonne and his brothers presented their mom with the Mother of the Year Award at the Associates For Breast and Prostate Cancer Studies Mother’s Day Luncheon. At the event, Laird gave the speech where he mentioned that his mom deserved that award and he loves his mom.

Laird’s eldest brother also spoke at the event and mentioned that their mom is a great, loving, and caring person. Furthermore, Sharon Stone’s son, Roan, added that the best advice she gave to him was to treat the others the way he would want to be treated and put his best foot forward.

In the same function, Laird’s mom also said that she is a lucky mom and is grateful that her boys choose her. She also added that motherhood didn’t come easily for her, but it came lovingly because of her angels.

Sharon has a great relationship with all her kids. Although she does not talk much about her boys, Stone once mentioned that she preferred to have a large family. They share a close bond with each other and seem to be living a happy life.

Sharon Stone’s son, Laird, seems to be a private person, and he has not revealed much about his personal life. His Instagram profile is also private. However, according to his Instagram description, he is a gamer.

Nevertheless, we hope that Sharon Stone’s kid, Laird Vonne Stone has great years ahead, and he succeeds in whatever career path he chooses.