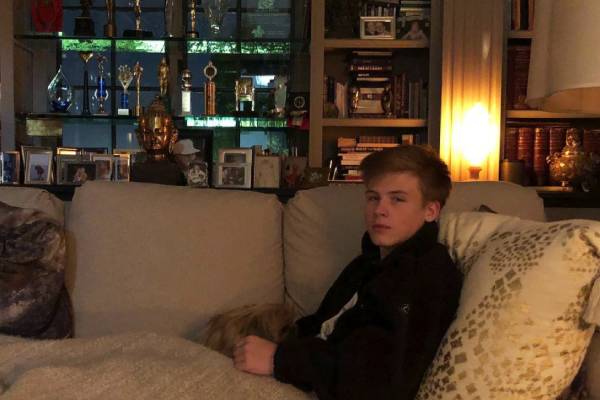 Roan Joseph Bronstein is mostly recognized as the son of Phil Bronstein and Sharon Stone. His father, Phil, is a journalist and editor from America. On the other hand, his mother, Sharon, is a well-known actress and producer.

Is The Adopted Son Of The Couple

As stated earlier, Roan Joseph is the handsome son of Phil Bronstein and his former wife, Sharon Stone. The estranged couple tied the knot on February 14, 1988. Unfortunately, the ex-pair could not conceive a baby, and Sharon went through three miscarriages due to an autoimmune disease.

So, in 2000, the couple adopted a son, whom they named Roan Joseph Bronstein. Sharon Stone and Phil Bronstein’s son, Roan, was born in Texas on May 22, 2000. However, his mom wishes him a happy birthday in June as the pair adopted him then.

Nevertheless, the handsome son of Phil and Sharon is in his early twenties. And with two successful parents taking care of him, Roan undoubtedly had a good childhood.

Phil Bronstein’s son, Roan, is a student. According to his Facebook, he started his high school at Eagle Hill School on September 13, 2015. Therefore, he has already completed high school. However, Sharon’s son has not revealed which university he is attending and what his major is.

Moreover, Sharon Stone’s son, Roan, is a model, and he has posed for several brands. In February 2020, his mom uploaded a picture of his first-ever magazine cover. He has done modeling for Odda Magazine especially.

Furthermore, Bronstein Stone is set to make his acting debut in the movie, What About Love. It seems like Roan has inherited his mother, Sharon’s modeling and acting skills.

The movie that also stars Sharon and Andy Garcia is expected to hit the screens in 2022. Moreover, going through his IMDb, one can see that Roan has appeared in several other projects.

We hope that his upcoming movie receives good reviews and becomes a huge success.

In August 2019, Roan filed papers to take his mother’s surname “Stone” to his moniker. According to The Blast, he filed a petition to change his name from Roan Joseph Bronstein to Roan Joseph Bronstein Stone. The only child of Phil and Sharon explained that he would like to take the surname of each of his parents.

Roan Joseph Bronstein Stone’s parents have been divorced since 2004. Six years after their marriage, in 2003, Roan’s dad filed for divorce, citing irreconcilable differences, and it was finalized the following year in January 2004. The ex-couple shared the joint custody of Roan at first.

However, a judge provided Phil with full custody of his son, and Stone was only given monthly visitation rights. Despite that, Roan seems to have a great relationship with his mom.

Phil Bronstein’s kid, Roan, is not the only child of his parents. His mom adopted Laird Vonne Stone and Quinn Kelly Stone, in 2005 and 2006, respectively. He has a great relationship with both of his adopted siblings and loves spending quality time with them.

Moreover, after the divorce, Roan Bronstein’s dad, Phil, got married to Christine Borders in 2006. The duo has two children together, but they have not released any details, including their names. Nevertheless, Roan might also have a good bonding with his siblings from his father’s side.

On a related note, there is no information regarding Roan Joseph Bronstein’s girlfriend/partner. Nonetheless, whoever the person might be will certainly be a lucky one.

Let’s hope we get to learn more about Roan Joseph Bronstein Stone’s relationship with his parents and siblings. Also, we wish the aspiring actor and model all the success in his career.