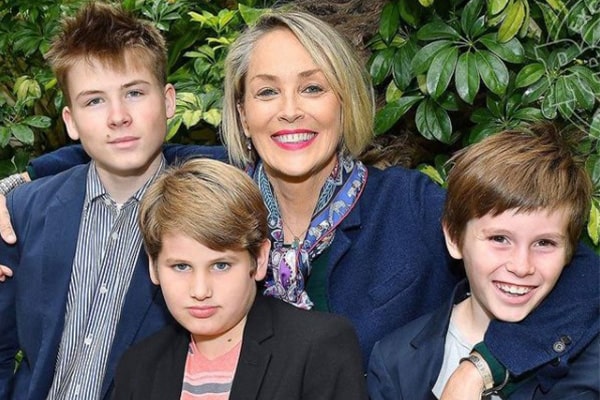 Sharon Stone, a famous American actress, producer, and former fashion model, is well-known for her performance as “Catherine Tramell” in Basic Instinct(1992). She has captivated the hearts of millions of people with her beauty and incredible acting in various movies. Hence, looking at her popularity, it is no surprise that she has such a huge fanbase who are always curious to know everything about their idol.

Furthermore, not only a great actress but she is also a loving mother of three handsome sons. And just like other celebrity kids, Sharon Stone’s sons are also quite famous in the media. So her fans are eager to know about their whereabouts.

Is An Adopted Son

Sharon Stone married twice and had always wanted to have her own children. However, she suffered from endometriosis and autoimmune disease which resulted in several miscarriages. Sharon couldn’t bear her own children, hence, she decided to adopt three kids, Quinn Kelly Stone being the youngest one.

Sharon adopted Quinn in 2006 after divorcing her ex-husband, Phil Bronstein. Quinn, who is a teenager now, has accompanied his mom to many events.

Although Sharon Stone’s son is often seen in media, just like many other celebrities, the Broken Flower actress keeps details about Quinn and his two brothers away from the spotlight.

Aforementioned, Quinn Stone has two brothers who are also adopted like him. Although Quinn and his brothers, Roan Joseph Bronstein Stone, and Laird Vonne Stone, are not biologically related, the siblings share a close bond.

However, some sites suggest that Quinn and Laird are biological brothers. But their mother, Sharon has not confirmed this information.

Moreover, born on May 22, 2000, Roan Joseph Bronstein is an emerging actor whose debut movie, What About Love, is releasing in 2022. Sharon had adopted Roan with her ex-husband Phil Bronstein in June 2000. The pair shared joint custody for a few years but, Phil was awarded full custody of their son in 2008.

On the other hand, Sharon adopted Laird and Quinn herself in 2005 and 2006 respectively, She is raising them as a single mother as Stone stated that she had no interest in pursuing a new romantic relationship.

Being the son of one of the wealthiest actresses, Quinn is living his best life. As he is a minor, the youngest Stone family member does not have his own social media account. But one look at the actress’ Instagram shows that Sharon Stone’s kid, Quinn enjoys going on vacations with his family members.

Furthermore, Sharon has taken care of Quinn and his brothers on her own. She feels grateful to enjoy life with her kids after almost dying due to a brain stroke. Hence, one can see that Sharon loves her children dearly.

Although Quinn lives a very private life, who knows, he might follow the footsteps of his mother and brother, Roan, and become an actor in the future. In addition, Quinn must have learned a lot from his mom regarding the film industry.

Nevertheless, young Quinn must be focusing on his studies for now. However, Sharon’s fans likely want to see him in the film industry soon. No matter what profession he will choose in the future, Sharon will undoubtedly support her baby boy.

Furthermore, we wish Sharon Stone’s son, Quinn Kelly Stone all the best for his future.