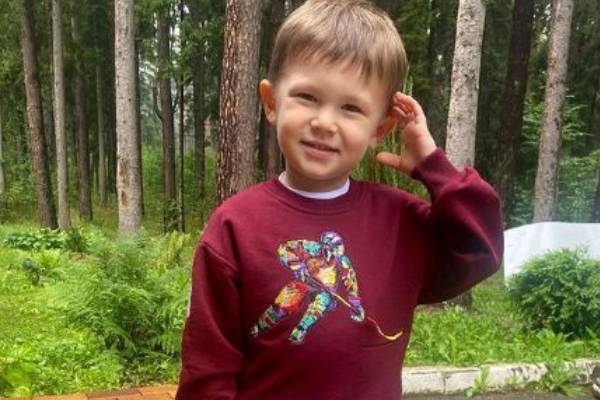 Sergei Ovechkin is the handsome son of Russian professional ice hockey player Alexander Ovechkin and his wife, Nastya Shubskaya. His father is a captain of the Washington Capitals of the National Hockey League. Popular by the nickname Ovi, Sergei’s dad is considered one of the greatest ice hockey players of all time.

Because of Alexander’s fame, Sergei has also become a celebrity at such a young age. Today, we shall learn about Alexander Ovechkin’s son, Sergei Ovechkin, and look at how he is growing up.

As stated earlier, Alexander Ovechkin shares a blissful marital life with Nastya Shubskaya. The couple was married in August 2016, eleven months after getting engaged in September 2015. As of 2021, it has been five years since the couple tied the knot, and in all these years of togetherness, the couple welcomed two sons.

On August 8, 2018, Sergei Ovechkin was born to his parents. The lovely duo shared the news of his arrival via Instagram post.

However, Alexander and Nastya did not reveal their son’s face until a year later. Sergei’s mom and dad were undoubtedly excited to welcome their first child and are raising him with immense love and care.

Is Named After His Uncle

Sergei Ovechkin’s dad, Alexander Ovechkin, named him after his elder brother. Alexander and his brothers, Sergei Ovechkin and Mikhail Ovechkin, were the three children of popular Soviet athletes Mikhail and Tatyana Ovechkina.

Sergei’s uncle, whom he is named after, had an immense impact on his dad, Alexander’s young life. He was the one who took Alexander to hockey events whenever their parents were no longer available. He used to make sure his little brother got where he needed to go.

Sadly, Sergei’s dad, Alexander, lost his elder brother when he was just ten years old due to a blood clot that resulted from a car accident. He still credits his brother for encouraging him to pursue a hockey career. In his memory, Alexander named his son, Sergei, after his elder brother.

Alexander Ovechkin’s Son Seems To Be Interested In Sports

Just like his dad, Sergei also seems to be interested in sports. It might be the influence of his dad, who is a professional hockey player, that he has shown an affinity to the game. In an interview with RMNB, the Washington Capitals’ captain mentioned that Sergei is strong, remembers all moves, and has good coordination.

Furthermore, Alexander Ovechkin’s son, Sergei’s comfort object is a hockey stick. Moreover, he is already an advanced hockey player with a powerful backhanded shot and can puck juggle. He also watches hockey while getting a haircut which shows the love little Sergei has for the game.

Moreover, in June 2021, Alexander took his son to the rink, and Sergei was in his hockey attire, a Russian national team uniform. He also had a hockey stick that was no taller than the young Ovechkin himself. Thus, he might become a successful hockey player like his dad. We hope that he achieves success in his career.

Alexander Ovechkin’s son, Sergei, is not his only child with his wife. Nastya had announced that she was pregnant with their second child, a son, in February 2020. And on May 27, 2020, Sergei Ovechkin’s younger brother, Ilya Ovechkin, was born.

His parents shared the news of the arrival of his baby brother, Ilya Aleksandrovich Ovechkin, via Instagram. Sergei loves his younger brother and enjoys quality time with him.

The name Sergei has a Russian origin, and it means “Servant.”