0 0
Home  »  Richest Celebrities   »   Alexander Ovechkin Net Worth – Look At One Of The Richest Hockey Players Alongside His Contract And Salaries
Published On:  September 6, 2021            Rupakheti 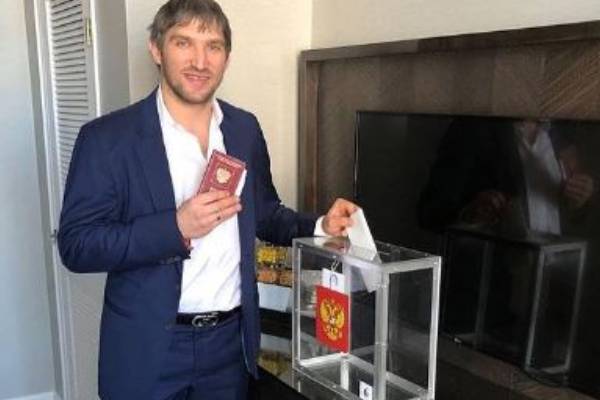 Alexander Ovechkin is a popular ice hockey left winger from Russia. He currently plays as the captain of the Washington Capitals of the National Hockey League (NHL). The successful ice hockey player goes by the nickname “Ovi” and “the Great Eight.”

Considered as one of the greatest ice hockey players of all time, Alexander has gained immense fame and popularity. As a result, the fans are curious to know how much the player has earned over the years. So, here are some detailed information about Alexander Ovechkin’s net worth and his earning details.

Alexander Ovechkin Net Worth And Earnings

Alexander, aka the Great Eight, has made millions from his successful professional hockey career. The Richest and several other online sites have reported that Alexander Ovechkin’s net worth is estimated to be $60 million. Similarly, Celebrity Net Worth has claimed his net worth to be $80 million.

Nevertheless, whatever might be the amount, it seems like he has earned a considerable sum from his professional hockey career and is a multimillionaire. So now, let’s learn how the talented player has amassed such an enormous fortune to his name and his income sources.

Alexander started playing hockey at a very young age. Moreover, when he first picked up a hockey stick, he was only two years old. He used to go to hockey events with his parents, and when they were not available, his late brother, Sergei Ovechkin, used to take him to those events.

At a young age, Alexander was already claiming victories and even made a name for himself in the Dynamo Moscow system by scoring 56 goals breaking Pavel Bure‘s record of 53. And it’s quite interesting that he broke Bure’s record when he was just 11.

At the age of 15, the Great Eight started to play in the Russian Super League in Dynamo Moscow. His professional debut happened in the 2001-02 season. The following off-season, Washington Capitals selected him first overall in the 2004 NHL Entry Draft. However, he remained with the Dynamo due to the 2004-05 NHL lockout.

After the lockout ended, Ovechkin signed with the Washington Capitals on August 5, 2005. Since then, he has been playing with the team. He has competed in several tournaments and claimed victories in several of them.

Moreover, most of Alexander’s earnings in his professional hockey career comprises his income from prize money, salary, and contract. Well, looking at the number of victories that he has claimed, there’s no doubt that he has made hefty money from the prize money alone.

Moreover, here is the table showing the average amount Alexander Ovechkin has received as his salaries from the Capitals as per The Richest.

Thus, looking at Alexander Ovechkin’s salaries and contracts worth millions, we can be assured that his fortune worth $80 million seems pretty reasonable.

Although the fines that Ovechkin had to pay might have made a slight dent in his fortune, he undoubtedly covered it with the money that he has earned from his career.

Apart from salaries and contracts, Alexander Ovechkin also earns a significant amount from the endorsement deals he has signed with many brands. Different companies like Nike, Bauer, Upper Deck, and Coca-Cola have signed the athlete.

Here is the table showing the amount that he has earned from the endorsement in different years, as stated by The Richest.

Furthermore, according to Heavy, he earns $3.5 million in endorsements. As a result of his deals with Papa Johns, CCM, Beats, and Nike, he has bagged $14.5 million in revenue. Moreover, in June 2016, he signed a six-figure deal with the Russian-based Otkrytie Bank.

The deal that is worth somewhere between $500K and $1 million is said to be one of the most profitable celebrity endorsement deals on the Russian market today. Furthermore, in November 2016, he signed a new deal with Plarium and the mobile game “Throne: Kingdom at War.” With millions of dollars to his name, Alexander might have also invested in small and big businesses to gain long-term profit.

Has His Own Store

Alexander Ovechkin has also launched an online store where he sells clothing featuring the official “Ovi” logo. Through the store, he sells several clothes like caps, T-shirts, masks, Neck Gaiter, Bag, Cap, and many others.

Here are some of the items from the store and their respective prices.

The Russian athlete might have gained significant profit from the store. And as a result, Alexander Ovechkin’s net worth has undoubtedly increased in recent years.

As mentioned earlier, Alexander Ovechkin has amassed multi-million dollars worth of fortune to his name, and as a result, he has been able to afford a luxurious lifestyle. He lives a comfortable life with his wife, Nastya Shubskaya, and sons, Sergei Ovechkin and Ilya Ovechkin.

In January 2012, he purchased a house in McLean, Virginia, for $4.2 million. Furthermore, he also owns a dacha in the Moscow region. Therefore, he might also pay a considerable amount in taxes.

According to Heavy, Alexander has about a dozen cars. However, he has not revealed which brand of cars he has. Nevertheless, he might have a nice insurance policy for the vehicles that he owns.

As he is still very dedicated to his career, one cannot doubt that Alexander Ovechkin’s fortune will increase in the coming days.