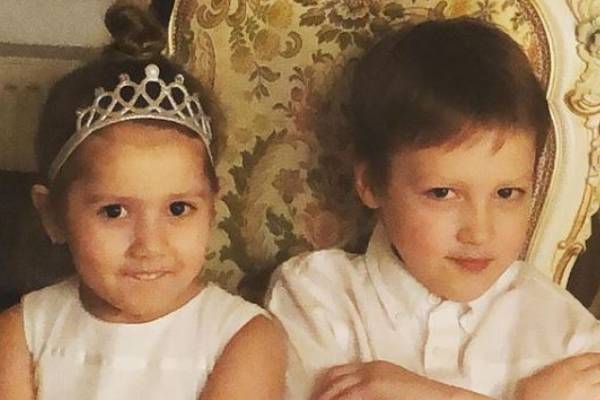 Pavel Bure Jr. and Palina Bure are the eldest and middle child of their parents. Image Souce: Alina Bure Instagram.

Pavel Bure Jr. and Palina Bure are the lovely son and daughter of the hockey legend Pavel Bure. Their dad, Pavel, is a former professional ice hockey player from Russia. He is one of the most well-known and successful hockey players in history.

The fame and recognition that Pavel has gained have also made his kids very famous. So, today, we shall learn in detail about Pavel Bure Jr.’s children, Pavel Bure Jr., and Palina Bure.

Moreover, the lovely couple has welcomed three kids together.

Pavel Bure’s wife, Alina, gave birth to their son, Pavel Bure Jr., on April 23, 2013. He is the only son and the eldest child of his parents. His mom and dad raised him with immense love and care. Furthermore, Bure’s son, Pavel Bure Jr.’s other name is Pal Palych.

As mentioned earlier, Pavel Bure and Alina Khasanova welcomed their first child in 2013. Two years after the birth of Pavel Jr., the ice hockey player’s little girl, Palina Bure, was born on July 20, 2015. While his son was born in the USA, Pavel Bure’s daughter was born in Moscow.

Furthermore, in an interview, Palina Bure’s dad mentioned that he had not told anyone about the birth of their daughter and kept it a secret. He did not know how the news appeared on the internet. Moreover, people even made a mistake and called his kid Alina instead of Palina.

Have A Younger Sister

In their many years of marriage, Alina and Pavel welcomed three kids together. In addition to Pavel Jr. and Palina, the married duo welcomed  Anastasia Bure, on December 28, 2018. Their daughter, Anastasia, completed the Bure family.

Palina and Pavel Bure Jr. love their sister and are growing up having a great time with each other.

Pavel Bure’s son, Pavel Bure Jr., also plays hockey. Due to his dad’s influence, who is a former NHL player, Bure Jr’s interest in ice hockey might have increased. Going through his Instagram, we can see that young Pavel has posted videos of himself playing hockey.

Furthermore, Pavel plays for the CSKA red-blue. In May 2021, he uploaded a photo where he was holding a tournament cup. Besides that, he has also won several other championships and has gained several awards.

Besides hockey, Pavel is also interested in martial arts and has a brown belt. He has also won different martial arts championships. So, Bure Jr. will probably become a successful hockey player or he might choose to become a martial artist.

Palina Bure Is An Aspiring Model

While his son has a keen interest in sports, Pavel Bure’s daughter, Palina, seems to be interested in modeling just like her mom. In March 2020, her mom uploaded a video of her walking on a runway wearing the clothes of Sasha Kim.

Furthermore, Palina also practices martial arts. Besides that, she also takes dancing classes at Marysya Dance Kids and has even participated in their competition. Pavel’s baby girl also won a competition.

Who knows, little Palina might become a successful model or dancer in the future. We hope that she achieves success in whatever career path that she chooses.

Pavel Bure Jr. and Palina Bure seem to be doing great. They often go to different countries for vacation and are living a great life with their parents and a sister. Let’s hope we get to learn more about Pavel Bure’s children in the coming days.