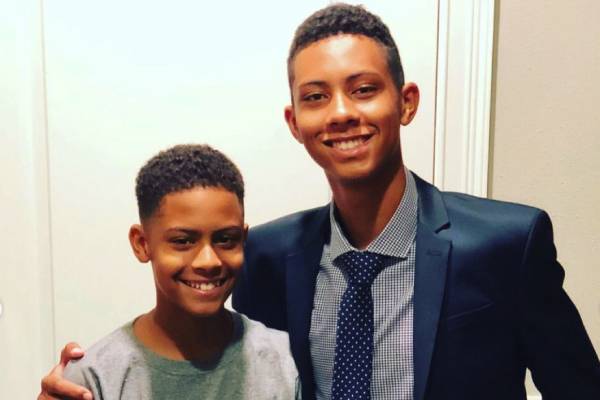 Alonso Parker and Julian Parker are famous as the sons of former NBA player Anthony Parker and his wife, Tamaris Parker. Their dad played in the basketball leagues in the US, Israel, and Italy. He is considered to be one of the most successful and beloved players in Maccabi Tel Aviv history.

With the fame that Anthony has gained, Alonso and Julian have also become public figures. So, today, we shall learn in detail about Anthony Parker’s children Alonso Parker and Julian Parker and see how they are growing up.

As stated earlier, Alonso Parker and Julian Parker are the handsome sons of former NBA player Anthony Parker and his wife, Tamy Parker. The couple tied the knot in June 1999. However, the pair has not revealed where they met and when they began dating.

Nevertheless, their marriage is still going strong, and in their more than two decades of togetherness, Tamy and Anthony became doting parents of two sons, Alonso Parker and Julian Parker.

Alonso and Julian’s parents have not talked much about their kids in the media. But there is no doubt that the boys had a great time growing up.

Anthony Parker’s son, Julian Parker, plays basketball and is the star of his team. Julian’s dad, uncle Marcus Parker, aunt Candace Parker, and grandfather Larry Parker are basketball players, and this might have made him interested in the sports. He previously played for the Corbett Prep Warriors basketball team.

In February 2020, Julian Parker’s mom, Tamy, uploaded a photo where he was holding a trophy. She congratulated him and his team for winning the championship game against Berkeley.

Looking at his achievements, we can assume that Julian might be the newest Parker family member to dominate the world of basketball. He might become even more successful in the sport than his dad, uncle, aunt, and grandpa.

Anthony Parker’s eldest son, Alonso Parker, completed his high school studies from Jesuit High School in May 2020 and officially graduated in June 2020. His parents shared pictures and congratulated him for completing his high school studies. Furthermore, he decided to attend Florida Polytechnic University and majored in Computer Software Programming.

On the other hand, Alonso Parker’s brother, Julian Parker, began his high school studies at Jesuit High School in May 2020. It is unknown what Julian will pursue after graduating from high school. But seeing his affinity towards basketball, we might see Julian playing in the NBA in the coming days.

One cannot doubt that Julian and Alonso have gained massive fame because of their father. However, despite the fame, the Parker brothers seem to be private regarding their life. Their dad also prefers to remain away from the media attention and the limelight. Furthermore, Alonso has not shared much of his life on his Facebook.

Nevertheless, the siblings might be living a great life with their parents and spending quality time with their cousins including Lailaa Nicole Williams. They are also set to welcome new addition to the family as Julian and Alonso’s aunt Candace revealed that she is expecting her second child.

In a candid Instagram post celebrating her second anniversary with wife Anna Petrakova, Candace announced that she will become a mother for the second time. Anna is the one who is carrying their child. Alonso and Julian’s cousin, Lailaa is very excited to be a big sister.

Let’s hope that we get to learn about Anthony Parker’s children, Alonso Parker and Julian Parker, in the coming days.

The name Alonso might have been derived from the name Alonzo, which has Spanish origin, and means “Noble, Ready for battle.” Similarly, the name Julian has a Latin origin, and it means “Youthful and Downy.”