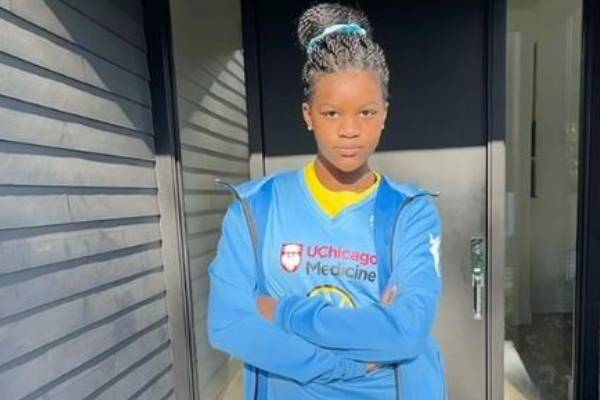 Lailaa Nicole Williams is the lovely daughter of Candace Parker and her former partner Shelden Williams. As the only daughter of the ex-couple, Lailaa is growing up with immense love and pampering.

Williams’ parents, Candace and Shelden, are basketball players and have gained immense fame and fortune because of their profession. Due to the fame of her dad and mom, Lailaa has also been under the scrutiny of the media for a long time.

Today, we shall learn in detail about Candace Parker’s daughter with Shelden Williams, Lailaa Nicole Williams, and how she is growing up.

Is The Only Child Of Candace Parker And Shelden Williams

Candace Parker and Shelden Williams got married on November 13, 2008. But their relationship did not last long, and the pair separated in November 2016.

However, in their eight years of togetherness, the ex-couple welcomed a daughter together. Candace gave birth to their only child, Lailaa Nicole Williams, on May 13, 2009.

Lailaa is the only child of the couple; therefore, she must be pampered a lot by her parents.

However, Lailaa Williams’ mom revealed that she and her wife of two years, Anna Petrakova are expecting their first child together. The WNBA champion took to Instagram to share the happy news and stated that young Lailaa was excited to be a big sister.

Lailaa might be the only child of her parents together, but she is now set to welcome a half-brother of half-sister through her mom’s second marriage. Let’s hope we get to see the siblings grow up and share a close bond.

Candace Parker and her daughter, Lailaa, also joined the ownership team. Lailaa Nicole Williams’ mom shared the news of them being business partners via Instagram. Tennis star Serena Williams, and her daughter Alexis Olympia Ohanian Jr., are also a part of the team.

Along with them, group members Billie Jean King, Ilana Kloss, Lindsey Vonn, PK Subban, and others also expressed their excitement about joining the ownership team. We hope that Candace and her daughter succeed in their new venture.

TikTok has become one of the most used social media apps in today’s world. Almost every people around the world uses TikTok. Just like them, Candace Parker’s daughter, Lailaa, also seems to be interested in making and sharing her videos on the platform.

Lailaa’s mom has posted several TikTok videos of the mother-daughter duo. They can be seen dancing to many popular songs on the site. Similarly, Shelden also shares funny videos of her. So Candace’s baby girl might be interested in the entertainment world and might even pursue a career in the industry.

As stated earlier, Lailaa Nicole Williams is the only daughter of Candace Parker and her former husband, Shelden Williams. Lailaa’s parents had tied the knot on November 13, 2008. However, sadly, after being married for eight years, the ex-pair’s marriage came to an end.

Lailaa Nicole Williams’ dad, Shelden, filed for divorce in November 2016. According to TMZ, the former couple had separated in August 2016 and were living apart. Her dad officially wanted to end their marriage, citing irreconcilable differences.

Furthermore, he was also asking for joint custody of Lailaa. Moreover, Lailaa’s mom agreed to pay $400K in alimony but did not have to provide spousal support. The former couple even divided the profits of their former home in Encino, CA, which they had sold for $3.75 million. Plus, Lailaa’s dad-mom also agreed on joint legal and physical custody of hers.

In addition, Lailaa Nicole Williams’ education would be equally funded by both of her parents, and they would even split any significant costs related to her care. This shows that despite the differences in their relationship, Candace and Shelden are raising their little girl with immense care.

At the moment, Candace Parker’s daughter with Shelden Williams, Lailaa Nicole Williams, is enjoying her time with her family. The former husband-wife duo has not revealed much about her to the media. But let’s hope, we will get to know more about Lailaa in the future.