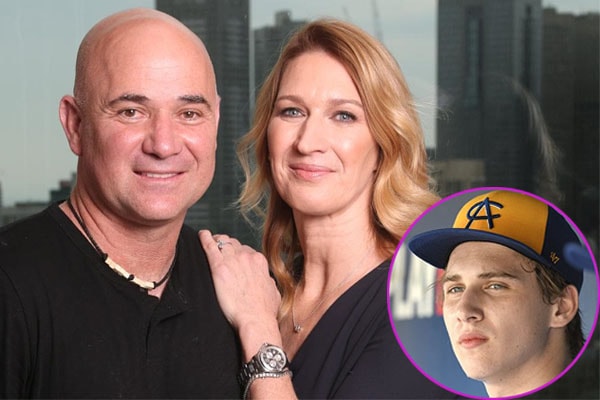 American junior baseball player, Jaden Gil Agassi, is the firstborn of the acclaimed tennis couple, Andre Agassi and Steffi Graf. He was born on October 26, 2001, in Valley Hospital, Las Vegas, Nevada. Even though his roots are in Tennis, Jaden has found his proclivity for baseball.

Andre Agassi’s son, Jaden Agassi, is a pitcher/third baseman. He also has a sister, Jaz Elle Agassi, who is 2 years his junior.

Andre Agassi’s son, Jaden Agassi, is the top-ranked player in his home state of Nevada. Ranked as no. 66 prospect in his class, Jaden has been steadily building his name in the baseball field. Steffi Graf and Andre Agassi’s son has also been participating for high-profile tournaments across the nation. Likewise, he even played in the Area Code Games Underclass event, which featured the top players in the country from the Classes of 2020 and 2021. During the summer, Agassi plays for Las Vegas Recruits, where he is one of the prime players. According to Perfect Game, he has also earned four MVP awards there.

The young and aspiring baseball player, Jaden Agassi, is committed to playing at the University of Southern California. According to MaxPreps, he is currently being homeschooled. Jaden, in an interview with the Perfect Game, said that it was very important for him to compete with great coaches and great teammates. Jaden said that he also loves the teammate aspect, and just having fun with a bunch of his friends.

Andre Agassi’s son is the spitting image of his mother, Steffi Graf. Having parents from the same athletic background, Jaden’s inclination towards baseball didn’t fail to surprise many. Andre said in an interview that he let his son choose his own calling. Andre and his wife, Steffi, exposed Jaden to various sports as a child. Jaden, of course, ended up liking baseball.

Andre and Steffi make sure to attend his sports events at school-level and in tournaments.

Jaden, like most teenagers his age, is active on Twitter. He frequently retweets about baseball games. Andre Agassi’s son also uses Instagram, where he has 1890 followers. But Jaden has kept his profile on private.

Derived from Hebrew, the name Jaden means “God has Heard”.

For more information on CelebrityBabies follow us on eCelebrityMirror