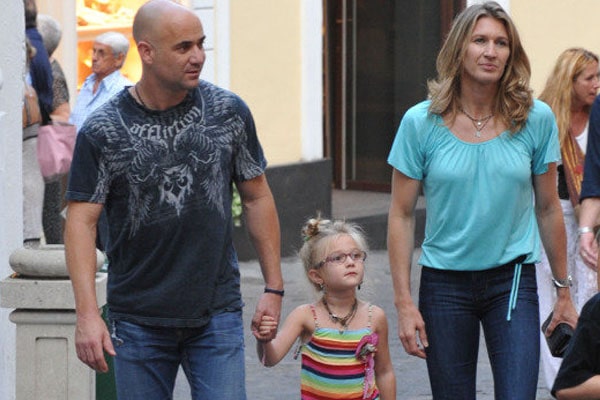 The renowned tennis couple, Stefanie Graf and Andre Agassi‘s daughter, Jaz Agassi, was born on October 3, 2003. Her full name is Jaz Elle Agassi. She is not the only kid in the family and has got an older sibling, Jaden Agassi.

Even if Jaz Elle Agassi is a celebrity kid, many of you may not know her as compared to her parents. But don’t worry, just stick up with the article until the end to know a lot about Andre Agassi’s daughter, Jazz Agassi.

Born to tennis powerhouses, Jaz Agassi has tried her hand in Tennis, according to her parents. But like her brother, she hasn’t shown much inclination towards the sport. Jaz’s mother, Steffi Graf, said in an interview that Jaz competed in horse jumping when she was younger.

But unfortunately, due to an accident where she nearly eluded a severe injury, she stopped. Now, Jaz more or less rides just for enjoyment. Steffi also said that Jaz was more involved in hip-hop dance.

The former tennis legends revealed that they just want their children to choose as they see fit. Well, looking at that, lovely Jaz Elle might be following her passion for bringing the best out of her. We wish good luck for whatever Jaz

The famous tennis duo hasn’t disclosed much information on the contemporary status of their daughter. She also seems to have an Instagram account that is, however, in private. Perhaps Jaz is the kind of person who loves privacy and secrecy.

Similar to her parents, Jaz Elle’s brother, Jaden Gil Agassi, is also building a career in an athletic background. But Jaz’s preference for any particulars at present is yet to be unveiled. Plus, her life is pretty much out of the reach of the media’s spectrum.

Going through Andre Agassi’s Instagram, we can see that he also barely posts his daughter’s photos. So, we can say that Jaz Elle is possibly happy with her low-profile and subtle life. Living a life far away from the spotlight and media most probably makes her feel alive.

How Did Jaz Elle’s Parents Meet?

Eight-time Grand Slam champion, Andre Agassi, started dating Stefanie Graf, the winner of 22 Grand Slam singles titles after both won the French Open in 1999. Before that, Jaz Agassi’s father Andre, was married to actress Brooke Shields, but they divorced in 1999.

On October 22, 2001, at their Las Vegas home, Andre and Stefanie officially became husband and wife. Their mothers were the only witnesses at their union.

Even though the fame Jaz was born into, her parents have relatively managed to keep her life at the low. We value their choice to shield their daughter from the media highlight and wish the young Agassi success in any of her future endeavors.

The name “Jaz” refers to ‘fragrant flower.’ Similarly, Elle is a French pronoun, meaning ‘she.’