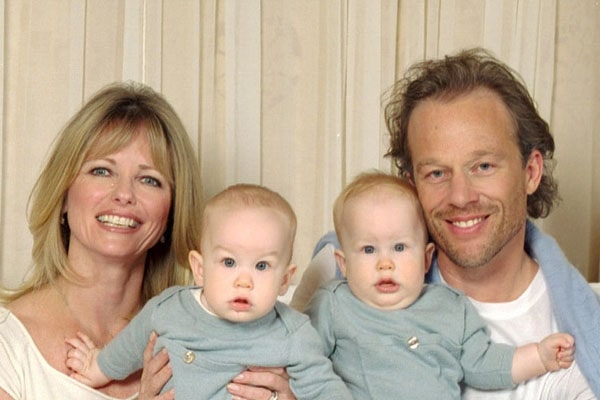 Jaden and Theo’s parents tied the wedding knot back in the year 1998. However, due to some unfortunate circumstances, the former couple got divorced in 2001. Theo and Jaden also have a half-brother named Zachary Peck, born on the 1st of October 1991 in Los Angeles, CA.

Jaden And Theo Stryker Are Twins Born Through A Surrogate

Cheryl Tiegs’ sons Jaden Stryker and Theo Stryker are twin brothers born on the 1st of July 2000. She had both of her sons when she was 52 years of age. However, she didn’t produce her children herself but the blonde beauty paid a surrogate, a much younger woman, to carry and bear her babies conceived in a dish from her eggs and the sperm of her former husband, Rod.

She told one in an interview after the birth of her twin sons,

“I just cried for months and months before the babies were born, and for months afterward. I was so scared of losing myself. But it can be so overwhelming. I was so afraid. It is being happy within that counts, It takes a lot of work. You have to monitor yourself not just daily but hourly to make sure you are OK and at peace within.”

Becoming a mother at her age and without a pregnancy has always been traumatic for most of the Hollywood gloss. Nevertheless, it was quite commendable to see the model in great shape and clearly happy just after the birth of her twins.

As mentioned before, Cheryl is one of the world’s most beautiful supermodels and original California girls. Back in the year 1978, Times magazine put her on its cover including the caption The All-American Model.

The Twin Brothers Are Living A Low Key Life

Most of the information regarding the twin brothers have always been kept in the shadows. Even the twins seem much likely to avoid the limelight of the media at all costs.

As of now, the twins are living a low key life away from the spotlight. But it doesn’t mean that the brothers are not enjoying their life to the fullest. Who knows Jaden and Theo might come out from the shadows and follow their mother’s footsteps in the coming days.

Theo Stryker: Theo is a masculine name of Greek origin providing the meaning of “divine gift.”