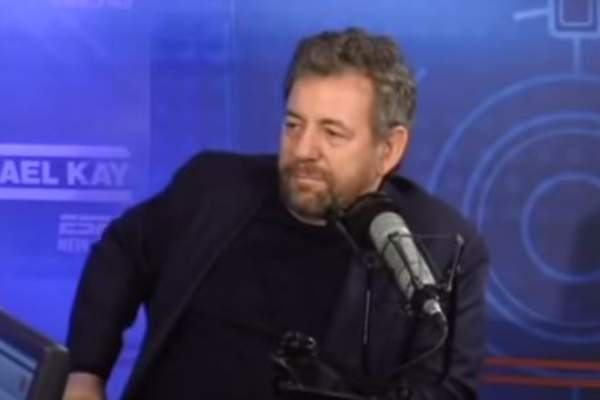 James Dolan is a proud father of six children, whom he shares with his two ex-wives. Image Source: Social Media.

As the businessman has remained in the limelight for many years now, people are enthusiastic to know about his personal life. Despite going through two failed marriages, the business tycoon is a doting dad of six kids. So, in today’s article, let’s learn in detail about James Dolan’s children with his two baby mamas.

As mentioned earlier, James has welcomed six babies with two of his ex-spouses. With his first wife, he welcomed four sons, Aidan Dolan, Charles Dolan, Ryan Dolan, and Quentin Dolan. Moreover, as per Aidan’s Facebook info, he has a sister named Marissa Georgetti.

After ending his first marriage, Dolan tied the knot with Kristin Dolan. The former couple was married for 15 years. In all these years of being together, the ex-pair welcomed two boys.

Unlike his four other kids, James Dolan’s sons with Kristin have remained away from the limelight. The Dolan siblings must, however, be having a great time together.

Quentin Is A Fitness Freak

One of James Dolan’s sons is making a name for himself in the fitness world. Having 58.9K followers on his Instagram, he provides tips and workouts on how to build a body like his. He posts his workout videos and diets on his social media. Likewise, he also shares pictures with his girlfriend and other family members.

Talking of which, James Dolan’s son is in a relationship with Sofia Bianchessi. It is unknown when the duo started dating, but she shared a picture with him for the first time in March 2019. In July 2021, she shared a picture of them on the occasion of their anniversary.

Nonetheless, the couple seems deeply in love with each other. Let’s hope the duo continues enjoying their relationship, and may their bond last a lifetime.

Ryan Is Vice President At The Madison Square Garden Company

While Quentin is doing well in his fitness journey, James Dolan’s other baby boy, Ryan, works at The Madison Square Garden Company. He joined the company in March 2016 as a Principal at MSG Ventures. Then, in June 2019, he was promoted to Vice President – Interactive Experiences. He still serves in position and must be earning really well.

Talking about his love life, Ryan is married to Sujin Dolan. The duo tied the knot on June 22, 2019. Furthermore, the pair welcomed a child. Ryan Dolan’s wife shared a picture with their baby for the first time in August 2022.

Moreover, in November 2021, Ryan bought a house, Previously the house was owned by Kendall Jenner which she sold for $6.5 million. The realtor was Ariana Grande‘s husband, Dalton Gomez. The house consists of six bedrooms, five baths, a rooftop patio, and a pool. All in all, James Dolan’s son must be doing well professionally and in his personal life.

Charles And Aidan Are Involved In Music Industry

Among James Dolan’s children, Aidan and Charles seem to have chosen different career paths. They are involved in the music industry. Aidan studied Music Composition at NYU. He is involved with the band Upright Man. He is in guitar and vocals. Likewise, his bandmates Nick Katz is in bass and vocals, and Max Yassky is in drums, percussion, and background vocals.

The band has released a number of singles and an album. Likewise, they must be earning significantly from tours. Furthermore, talking about Aidan’s love life, he has been dating Fallon Tur since September 2016.

On the other hand, Charles has not revealed much about his relationship. Is it possible he is focusing on his career? Let’s hope we learn more about his personal details in the coming days.

A Lady Pretended To Be James Dolan’s Daughter

In September 2016, it was reported that a young lady was spotted in New York City over the weekend, claiming to be James Dolan’s daughter. She was accidentally bumped by some girls and went over to their group and started yelling that her father owns Madison Square Garden. She further continued that she was his baby girl and was accusing those girls of looking at her.

In addition, the girl also cursed them. Then she flashed everyone there. Well, it has been reported that the businessman has six sons and no daughter.

All in all, James Dolan’s children seem to be living comfortably. While four of his boys from his first marriage are doing well professionally, his two kids with Kristin have remained away from the spotlight. They must be focusing on their studies. We look forward to learning more about the Dolan siblings in the coming days.

The name Ryan originated from the Gaelic words righ and an, and together it means “little king.” A French male given name, Quentin, derived from the Latin first name Quintinus, which is a diminutive form of Quintus, meaning “the fifth.”

Derived from the German word ceorl, Charles means “free man.” The name Aidan has an Irish origin, and it means “little fire.”