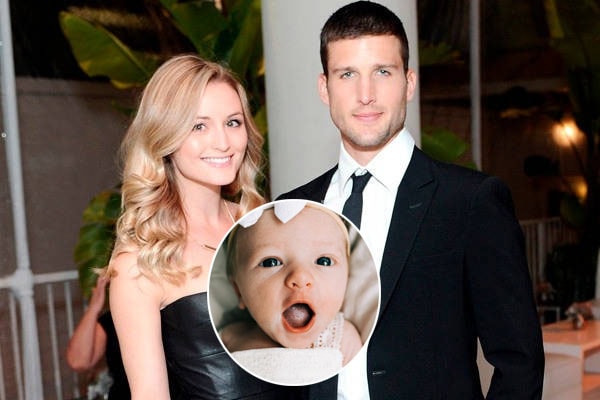 Parker Young is an actor. He is famous for portraying Richard Evans on the American comedy series, Imposters. Besides that Parker has also acted in other TV series and movies. Things You Shouldn’t Say past Midnight, Family Fortune, Fresh Off the Boat are some of the TV series and films Parker has worked in.

The Imposters’ star Parker Young and fiancee Stephanie Weber seemed filled with blissfulness after welcoming daughter Jaxon Orion Young to their family. Parker stated that he is going to shower the little lady with more love that she won’t be able to handle.

Parker Young has shared the good news with his fans via different social media outlets. In the first photo, we can see Parker holding his small daughter in his hands. The way Parker is looking at her gives a clear picture of how much he adores his daughter Jaxon Orion Young whom he addresses as his J.O.Y. Like Parker Young’s daughter, Dania Ramirez and Bev Land’s twin Gaia Jissel and John Aether Ramirez Land are also adorable.

People are sure to get lost in Parker Young and Stephanie Weber’s daughter, Jaxon’s blue eyes. She is so cute and adorable that people fall for her in the very first instance.

And in the last photo of Parker Young’s daughter, he is seen cuddling his little one. All the fans were in line to congratulate the lovely couple.

Along with their cute daughter Jaxon Orion Young, Parker Young and fiance Stephanie Weber are the next adorable thing. The love between the high school sweetheart is still intact.

Parker Young met his fiance Stephanie Weber when he was 17, and she was 15. As the lovely pair of Parker Young and Stephanie Weber set off the pink smoke bombs during the gender reveal of their baby, at that moment Parker popped the question to his girlfriend, Stephanie.

For the time being the small family is happy and cherishing what they have got.

The name Jaxon is of English origin which means “God has been gracious.” Jaxon is based on John or Jacques.

As for the name Orion, it is originated from the Greek and Roman mythology. Orion is the name f Poseidon’s son.