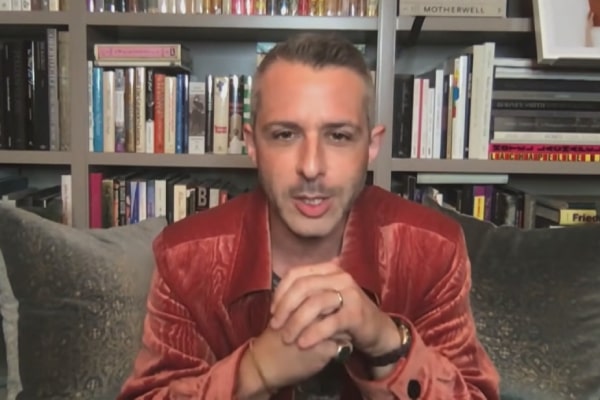 Jeremy Strong has been a household name ever since he portrayed the character Kendall Roy, in the HBO television series Succession. In addition, the Emmy Award-winning actor has starred in several other movies and series such as Detroit, The Big Short, The Judge, Parkland, Mob City, etc.

Behind his flourishing career, the Boston native is a proud father of three whom he shares with his wife of half-decade, Emma Wall. So, how Jeremy Strong’s children are growing up? Let’s find out in this article.

Jeremy Strong and Emma Wall first met in 2012 in New York City at a party during Hurricane Sandy and started going out. They got engaged and lived in Los Angeles for some time. After being together for four years, the smitten couple led their bond to another level and became husband and wife on 1 August 2016.

After walking down the aisle in Denmark at a castle named Dragsholm Slot, the pair went on to have three adorable daughters. Ingrid Strong is the first bundle of joy to the married duo, who arrived in 2018. Afterward, Ingrid’s parents welcomed her younger sister, Clara Strong, in 2019. Finally, the youngest Strong joined the family in late 2021, whose name has not been disclosed yet.

Having a lot of siblings of similar age is a blessing, and it is like having built-in best friends. Jeremy Strong’s children also don’t have much age gap, so they are set to become best buddies with each other. Plus, they might also compete for a lot of things and get into siblings fights.

However, it will help them to develop a strong bond with each other. Let’s hope the actor’s kids will grow up having a wonderful time together.

Their Father Creates Space For The Family

Ingrid, Clara, and their little sister are lucky to have Jeremy and Emma as their parents. Aside from professional success, their parents prioritize family. The Strong sisters’ doting dad does a really good job when it comes to taking out time for the family and having a normal life.

Furthermore, while talking with GQ, the actor said that his life changed a lot, in a good way, since he had a family. The Boston native thinks there is a stable center that he never had before. The Yale graduate went on to add his life used to be just kind of transient, and work was the only thing he had in his life. But now Jeremy has a solid reason to come home.

Jeremy Strong’s Children Are Growing Away From The Spotlight

The Succession star’s daughters are growing away from the media limelight. It is common for celebrities and their kids to prefer life away from the public eye. Likewise, Jeremy and his family have kept their personal lives under radar. The actor and his spouse are not active on social media platforms. As a result, the media has not gotten any sight of the Strong sisters. Moreover, the Strong family is so secretive that the paparazzi have not gotten sight of the kids.

Overall, Jeremy Strong’s daughters are still young. They must be having a wonderful time. Let’s hope the actor and his partner come at ease and open up about themselves in the coming days. We wish the Strong siblings the happiest childhood.

The feminine name Ingrid stems from the Old Norse words Ingiríðr and Ingfríðr, which means beloved and beautiful.