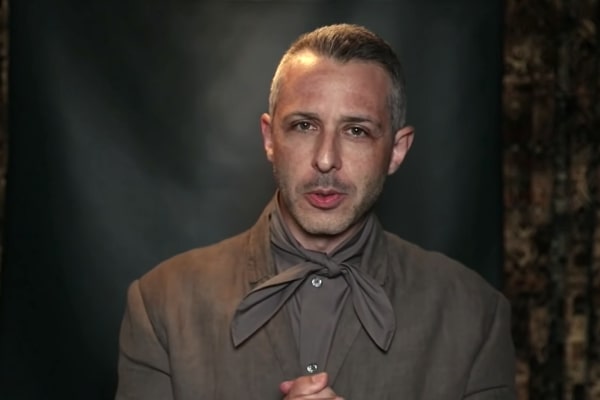 Jeremy Strong and his partner Emma Wall have been together for several years. Image Source: Social Media.

The HBO television series Succession has been a massive success and resulted in considerable attention to its casts and crews. Jeremy Strong is one of them who even earned an Emmy nomination for portraying a dim-witted and insecure businessman Kendall Roy in the show.

In addition to that, the Boston native is appreciated for his works in The Trial of the Chicago 7, The Judge, The Big Short, and many others. Talking about the talented performer’s personal life, he has been married to Emma Wall for six years. But how did it all begin for the adorable pair? Who is Jeremy Strong’s wife?

Let’s find it all out in today’s article and take a detailed look at their union.

Who Is Emma Wall?

The Succession star’s better half was born in Denmark. Regarding her profession, the actor’s spouse works as a child psychiatrist. Jeremy Strong’s wife graduated from the University of Oxford. Emma seems to have been working in the field for a long time now. On the other hand, her hubby is a graduate of Yale University and has a BA degree.

Aside from that, Emma Wall has not disclosed much about her family background, and she appears to prefer her life away from the media limelight. Not only that but, the beautiful lady is not present on any social media platform.

The famous actor Jeremy Strong met his wife for the first time in 2012 at a party in New York during Hurricane Sandy. The couple hit it off instantly. Following their first encounter, the duo dated for about four years. Finally, on 1 August 2016, the smitten pair exchanged their wedding vows in Denmark at a castle called Dragsholm slot.

Talking with The Guardian, The Judge star gushed about his wife’s home country. He said he loves Denmark and thinks it is a very sane and gentle place. Emma Wall’s husband further added that the country feels like a refuge to him and is a great docking station from his enervating, scary, and stressful career.

Currently, the Strong-Wall couple lives in New York. But they also have apartments in Copenhagen and Brooklyn. Additionally, during the pandemic, the married duo bought a vacation house in Tisvilde. It has been reported that the actor is not only good at his work but also creates a space for his family and normal life. The picture-perfect family must be enjoying their life away from the media scrutiny.

Apart from the marital bliss, Jeremy and Emma are also proud parents of three adorable daughters. The pair first entered parenthood in 2018 after they welcomed their first baby, Ingrid Strong. Afterward, Jeremy Strong’s spouse gave birth to their second daughter, Clara Strong, in 2019. Moreover, the married duo’s most recent bundle of joy arrived in late 2021.

All in all, Jeremy Strong’s children are being raised away from media scrutiny.

Currently, the married duo appears to be focused on raising their three cute daughters. Aside from that, they are also continuing their professional lives. Emma’s hubby said his life had changed a lot in the sense of stability which he never had. The actor now feels good, and he has something to come home to.

It is evident how much Jeremy values his family. It must be the same for the psychiatrist. Let’s hope the pair’s ever-increasing love and support for one another last forever.

Overall, Jeremy Strong’s wife is a well-educated woman who is involved in a noble profession. In addition, she is a loving partner and a doting mother. We wish Emma and her family prosperity and happiness in the coming days.