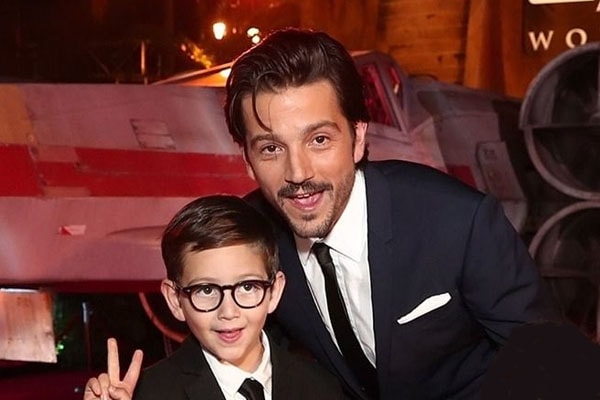 Jerónimo Luna, Diego Luna’s son with ex-wife Camila Sodi, was born on August 2008. The ex-partners Diego and Camila married the same year they welcomed Jerónimo as their first child.

The handsome Jerónimo is a big brother to Fiona Luna who was born on July 2010. Since the ex-couple divorced in 2013, they are co-parenting their children. Also, they are on good terms.

Jerónimo Luna Is The Miniature Of His Father Diego Luna

Diego Luna’s son Jerónimo Luna is only a few years away to becoming Hollywood’s new face. Well, if that’s what he desires to become then he will probably even surpass his dad’s fame. The junior Luna is undoubtedly handsome just like his Mexican father, thanks to Diego’s handsome gene that runs in the family blood.

Jerónimo has already stolen fans hearts. Maybe he even stole his father’s fans while he attended the world premiere of Rogue One back in 2016 together with his family. Jerónimo is a huge fan of Star Wars, and he was all excited that his father worked in one of its franchise. Who knows maybe the future holds a place for this little man to be in the movie himself!

The beautiful Camila comparatively spends more time with the kids than Diego. At least that’s what her Instagram posts render. But she is cautious when it comes to sharing the children’s picture. She makes sure that their faces are hidden. Camila is one of those celebrity moms who know how to keep their children’s privacy. But even from the limited pictures of Jerónimo, we can see that this handsome dude is growing well and healthy.

Although Jerónimo’s parents decided to end their relationship, they have not let their children feel the need for love. We can see that the parents-children relationship is not affected by their decision to go on separate ways.

Jerónimo is a name for a boy which is derived from Greek name Hieronymos. It means sacred name.