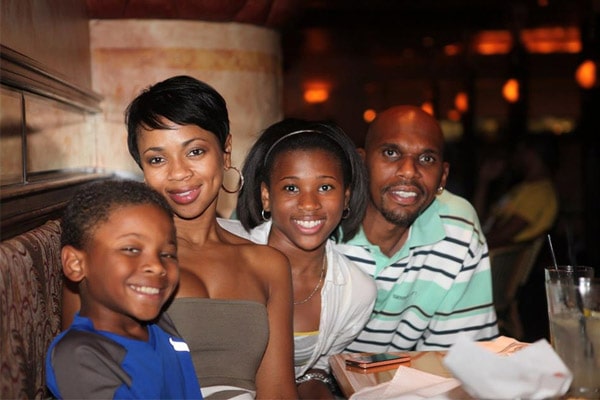 Most of the kids follow their parent’s footsteps, either it is in the Entertainment Industry, Business, or in sports. So, are the basketball coach Jerry Stackhouse’s kids following their father in games or involved in other professions? Let’s know it and many more here.

As mentioned earlier, the American basketball coach Jerry Stackhouse shares two sons with his wife, Ramirra. The oldest son of Jaye Stackhouse was already born when Jerry and his wife Ramirra married. Jaye is following his dad’s foot trails in American sports. But he chose to be in the football field in contrary to his dad’s, who is in the basketball field.

Back in 2015, Jerry Stackhouse’s son, Jaye, committed to being a part of the UNC football program. He had got a scholarship offers from UAB and Georgia State along with attention from several ‘Power 5’ conference teams. But, he selected to join his dad’s alma mater, the University of North Carolina. Before this, Jaye was a football as well as a basketball player for Bulldogs. He was the cornerback in North Gwinnett High School’s football team. T

Apart from being involved in sports and being a service chair for the Psi Delta Chapter since 2018, Jaye is connected to other various fields too. He is a member of  Carolina Sports Business Club since 2016. Before that, he participated in the Carolina CREED Leadership Program from September 2015 to April 2016.

Furthermore, Jaye Stackhouse has volunteer experience as a member of the Triple Threat Fund. He was also a Football Team Volunteer at UNC Health Care. With his hard work and proficiency as a Student-athlete, the eldest son of Jerry Stackhouse, Jaye has earned various Honors and Awards. He got 2-Time ACC Academic Honor Roll Selection from Atlantic Coast Conference and UNC Dean’s List Selection from UNC-Chapel Hill.

Plus Jerry Stackhouse’s son is a Project development co-ordinator and was a director of marketing and business development in Trafficlight.

Talking about the youngest son of Jerry, Antonio, he graduated from Friendship Christian High School in 2019. He was a team member of the same school’s basketball team. Antonio was selected as Player of The Game in the game against Peoples Baptist Academy on February 8, 2019.

Currently, there is no information regarding Antonio’s enrollment for further study and which team he has joined. But seeing his stats during his high school days, Jerry Stackhouse’s son Antonio seems to earn fame just like him as a basketball star.

Pretty Alexis Stackhouse is the only daughter of Jerry Stackhouse and Ramirra Marks. The little girl of Jerry, Alexis, celebrates her birthday on September 2. She is a television, radio and film student at Syracuse University. This stunning beauty is an aspiring media professional, specifically in directing, screenwriting, and creative production.

Alexis worked as an intern in One Foot Productions, where she assisted with creative development. Moreover, she also assisted in talent acquisition for events like NBA All-star Weekend 2020, and the Apollo Spring Gala.

Besides, the versatile daughter of Jerry, Alexis, worked on various professional film sets. She is also the participant of numerous skill development programs like Shonda Rhimes’ Masterclass for Screenwriting and Oxbridge Academic Program for Filmmaking at UCLA. With such skills and training, Alexis has produced a short movie “House Blend” on her own during quarantine of 2020.

Apart from being skilled in film making, Alexis is an athlete too. She is on the sports team at Syracuse University. The energetic girl of Jerry earned the ‘Cuse Scholar Award’ in 2019 from her University for getting her perfect 4.0-grade point average. Hence, Alexis also is not far from the sports genes of her dad Jerry Stackhouse and her siblings.

Talking about the love life of Alexis Stackhouse, she seems to be in a romantic relationship with James Jensen. Jerry Stackhouse’s daughter Alexis had posted some close pictures of her with her boyfriend on her Instagram page.

Thereby, Jerry Stackhouse’s children have their dad’s sports blood flowing in their veins. All three kids of Jerry and Ramirra are in sports, and they give the credit for their success to their dad, Jerry Stackhouse.

In Latin ‘Jaye’ means ‘a blue crested bird’ whereas in Sanskrit it refers to victory.

Antonio, in Italian, means ‘beyond praise.’

In Biblical, the girl’s name ‘Alexis’ meaning is ‘Protector of Mankind.’