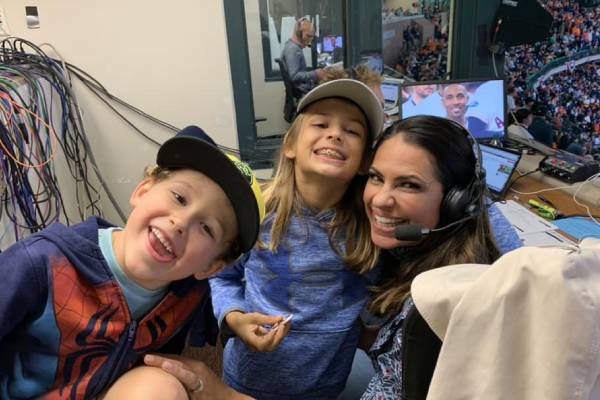 Jessica Mendoza is a sportscaster from America. Born and raised in Camarillo, California, Jessica Ofelia Mendoza is a former softball player who played at Stanford and was a member of the United States women’s national softball team from 2004 to 2010. Mendoza also played in National Pro Fastpitch professionally. Currently, she works for ESPN as an analyst and color commentator for its Major League Baseball (MLB) coverage.

Apart from being a successful sports personality, the California-raised former sportswoman is a proud mother of two sons, whom she shares with her husband, Adam Burks. Many might be wondering if the boys have followed in her footsteps. So, today’s article is about Jessica Mendoza’s children with her hubby. See how they are growing up.

Caleb Ashton Mendoza-Burks and Caden Adam Mendoza-Burks are Jessica Mendoza’s sons with Adam. Caleb is the eldest, and he was born on August 12, 2009. Furthermore, in August 2013, Caden arrived. The Burks siblings’ dad shared the news of his arrival on social media.

As the boys have only four years of age difference, they must be best buddies and must be having a splendid time growing up together. In addition, they often travel to several places with their dad and mom. To talk about the marriage of Caleb and Caden’s parents, the couple has been happily married since October 2006.

The duo met a day before the 2004 Olympics at a wedding in Southern California. The lovebirds hit it off from there and have been together ever since. After Caleb and Caden’s mama returned from Athens following the Olympics, their dad proposed to her with a scrapbook. Eventually, the smitten pair walked down the aisle.

The family of four lives a comfortable life in Moorpark, California. Now, let’s learn further if the Burks boys are into sports.

Being born to a sportswoman, Jessica Mendoza’s children were exposed to the sports world from the very beginning. Previously as a softball player and now as a sportscaster, Mendoza has been involved in different sports. As mentioned earlier, she covers the MLB games for ESPN.

Likewise, Jessica Mendoza’s son, Caleb plays hockey. He is the captain of The White Knights. In February 2019, the Knights received their Championship Medal. A month earlier, the young guy was honored with the “Golden Puck” for his exemplary performance. He seems to be playing well. However, it might be too soon to discuss if he will play hockey professionally.

On the other hand, it is not known what Caden is interested in playing. The boys attend several baseball matches with their parents. Having watched different baseball games and his elder brother’s hockey games, will Caden also be influenced into sports?

Being a working mom means juggling motherhood and work life. And when you are involved in the sports industry, it also requires you to be away from home for a long time. Likewise, Jessica has a job that takes her all over the country, and she is away from home and her family a lot. Jessica Mendoza’s sons have already started going to school. As of 2019, Caden was in kindergarten, and Caleb was in fourth grade.

Over time, Caleb Ashton Burks‘ mom realized that she was losing so much time with him since he started school. She was off work when he was at school, and when he didn’t have to go to the academy, she was away at baseball games. Thus, the sportscaster tried homeschooling after her firstborn’s new school had an option to “hybrid” homeschool.

The couple homeschooled Caleb on Mondays and Tuesdays, and he would attend school full-time Wednesday through Friday. Caleb Burks‘ mother was hesitant at first. But as time passed, the mother-son duo worked it out.

In an interview, Jessica talked about her homeschooling experience. She discussed about good and bad sides of homeschooling her son. On the other hand, Caden Adam Burks is still young, but who knows, he might also be homeschooled like his brother.

Moreover, Jessica Mendoza’s husband is a stay-at-home father. After Caden Burks‘ brother, Caleb, was born, their dad left his job in civil engineering and started looking after him while Mendoza was away. Just like in the case of homeschooling, the former softball player was hesitant at first. But after Burks insisted, she tried. Needless to say, it seems to have worked out.

Nevertheless, Jessica Mendoza’s children seem to be doing well. We hope we get to see the elder Burks playing hockey professionally someday. Hopefully, the boys will make their parents proud in the upcoming days.

The name Caden might have come from the Old English name Cade, which means “strength.” It might also have been derived from the Gaelic surname Mac Cadain, which means “son of Cadain.” On the other hand, Adam is a well-known Hebrew name that means “son of the red Earth.” Its meaning comes from adamah, which is a Hebrew word meaning “earth.”