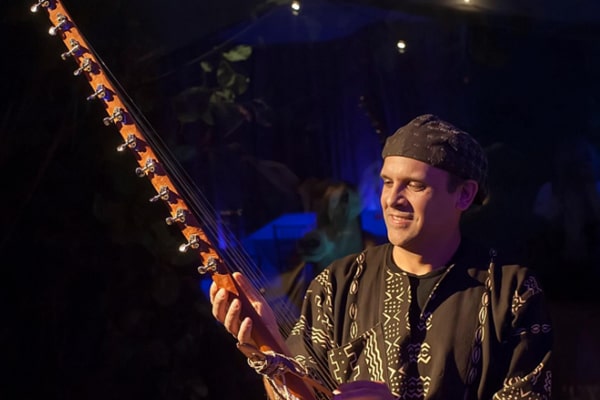 Joan Baez and David Harris were once the power couple in the music world. They got married on March 26, 1968, at St. Clement’s Episcopal Church in New York. Baez and Harris had known one another for about three months before they decided to wed, and Times magazines at one point even referred to it as ‘Wedding of the Century.’

The nuptial of David Harris and Joan Baez resulted in a baby boy named Gabriel Harris. They welcomed their first child on December 2, 1969. Furthermore, David and Joan had joint custody of their kid and maintained friendship even after their divorce. There are more than enough accounts of Joan and David’s marriage and their works or even incarceration time together.

But, for now, let’s talk about Joan Baez’s son, Gabriel Harris, and his whereabouts.

Gabriel Harris was surrounded by music since his birth. So, it is natural for him to passionately sought after the musical world. Hence, he devoted himself to seek the secrets of drums since he met master drummer Babatunde Olatunji in the 80s.

According to Rhythm Village, Gabriel was inspired to travel to West and South Africa to discover the traditional melodies with master drummers and griots.

Moreover, in the 90s, Gabriel performed and recorded with the innovative world fusion group, Collage of I, and founded Naamu Groove Ensemble.

Additionally, Harris also worked with Marianne Aya Omac and Burkina Faso’s Malima Kone and Les Harmonies. Thus, Joan Baez’s son, Gabriel, is doing great in establishing himself in the world of music. But did you know Harris is a married man and an amazing father of a daughter?

Gabriel Harris Is Married To Pamela

Aforementioned, Joan and Harris’ son, Gabriel, is a musician and Rhythm Village’s CEO. He prefers to keep most parts of his life to himself, and one of them is his marital life with his longtime partner, Pamela.

Although Gabriel Harris’ wedding was a private matter, he and his wife, Pamela Jankelow, are still together and blissfully married.

Famous as Garbriel Harris’ wife, Pamela does not like to come into the spotlight. Hence, there is no way we know more about her. However, while going through Jankelow’s Facebook, it is evident that she is a free soul.

Moreover, Harris’s spouse, Pamela, loves adventure and is a social bee. She must be enjoying her life dancing, traveling, and focused in career, and enjoying life. Maybe that is why Pamela looks so young, even as a mother of a teen daughter.

On January 13, 2021, just some days after Gabriel Harris’ mother, Joan Baez turned 80, it was notified to the public that she would receive the 2020 Kennedy Center Honor in a ceremony. However, it got postponed due to the coronavirus pandemic. So, the pre-recorded ceremony broadcasted later in June of the same year on Paramount+ and on CBS.

Gabriel Harris’ Daughter, Jasmine, Is Close To Her Grandmother

Aforementioned, Joan Baez’s only child, Gabriel Harris, is a married man with a child. He welcomed his daughter, Jasmine “Jazzy” Harris, with his wife, Pamela.

Gabriel Harris’s daughter and Joan Baez’s granddaughter, Jasmine, is a sweet girl who has already immersed herself in the music world.

While talking to SF Gate, Joan revealed that Jasmine calls her ‘abuela’ because she wouldn’t allow her to call her Grandma. Moreover, they enjoy playing together and even appeared in musical events together.

Furthermore, Jasmine is very close to her parents, who believe her to be a soft-hearted child.

The family of three is currently living in California along with their fur family. Therefore, let’s hope Joan Baez’s son, Gabriel Harris enjoys his musical career and lives in good health in the future as well.