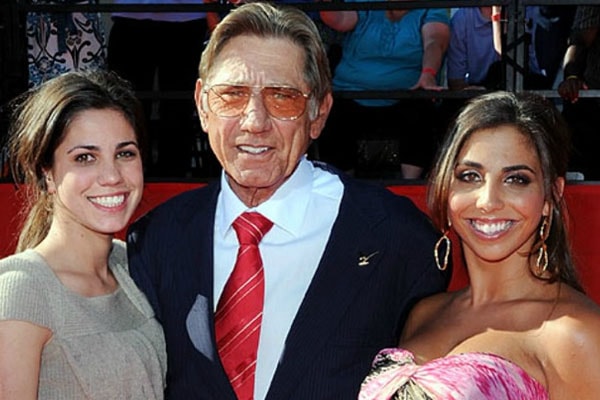 One of the NFL’s Greats Joe Namath is a father of two beautiful daughters, Olivia Namath and Jessica Namath. Joe had his daughters with his ex-wife Deborah Mays who later changed her name to Tatiana Namath.

Joe Namath is a retired American Footballer. He goes by the nickname Broadway Joe. At the peak of his success, Joe was a hit name in the NFL. He has got a small family consisting of his two daughters, Olivia and Jessica.

Deborah Mays, an aspiring actress, was Joe Namath’s wife. But the ex-couple ended their marriage after fourteen years of marriage. They married each other in 1984 and divorced in 2000. So, let’s not waste any time and know more about Joe Namath’s daughters.

Joe Namath And His Daughters

From the marriage of over 14 years, Joe and his ex-wife Deborah’s life was blissful with two beautiful daughters, Olivia Namath and Jessica Namath. The two daughters of Joe Namath are famous but in an entirely different way. Also, like Jim Carrey’s daughter, Jane Erin Carrey, both of them are grown up.

One of Joe Namath’s daughter is famous for her photography skills, and the other one is for being a convict. Let’s find out who is who.

Jessica Namath Is The Eldest Daughter

Beautiful Jessica Namath was born as the eldest daughter of Joe Namath in 1986. She has been able to stay away from troubles, unlike her five years younger sister Olivia. Currently, Joe Namath’s eldest daughter Jessica works as a photographer.

Jessica also is a fluent Spanish speaker and attended The Archer School for Girls. She was married to Brian Kennedy and had a daughter named Jemma Kennedy.

Joe Namath’s daughter, Jessica Namath, filed for divorce from her husband Brian and is probably seeking child support for the couple’s daughter. However, her ex-husband, Brian, has dragged his father-in-law between their feud. He claimed that her father has been supporting her financially.

To prove his point, Brian’s attorney wrote the discovery would be fair game since ‘her wealthy father supports the wife.’ He hopes the football retiree’s financial history would ‘provide evidence of extensive gifting to the wife by her dad.’

Olivia Namath Was Arrested In 2010

Born in 1991, Olivia Namath is Joe Namath’s youngest daughter with ex-wife, Deborah Mays. Like many celebrities’ kids, Olivia also has got her fair share of trouble and was arrested in 2010 after cops found half a pound of weed in her car.

The 29-year-old Olivia was also caught driving with marijuana and liquor in her car. Fortunately, Joe Namath’s daughter was not hit with a DUI charge though her car was stashed with beer bottles, rums, and bags of weed.

One thing is sure though, Olivia Namath has an eye for art as she attends many art exhibitions. She has a daughter named Natalia with her past street thug husband, Edwin Baker III. Natalia was born on May 21, 2007. For the time being, Olivia is staying away from troubles as much as she can.

As of May 2020, we assume she is happy with her married life and family. To sum up, it looks as though she along with her family are living a great life far away from the media and spotlight.