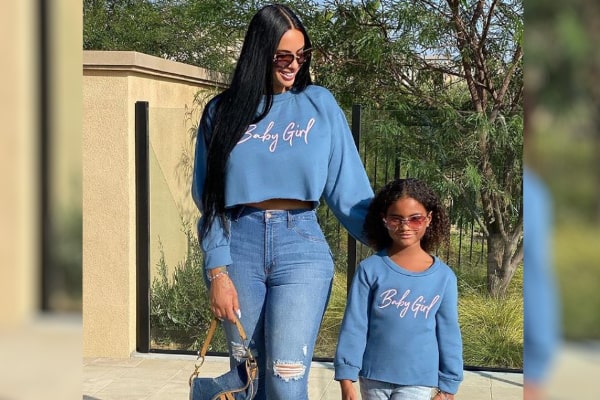 In the glamorous world of fame and wealth, it is not often that celebrities flaunt their intimate connections. In contrast, many famous personalities keep their romances well hidden and out of the limelight.

So, when the video of Canadian-American rapper Drake having a private date with a mystery woman surfaced online, Team Drizzy went searching for who this new woman on Drake’s long list of lovers might be. Netizens later found out that Drake’s dating partner for the night was Johanna Leia, an established model, and entrepreneur.

Even though the news about Drakes’ split up with Johanna made headlines in late October 2021, it didn’t stop curious fanatics from digging deeper into the businesswoman’s profile. Johanna Leia, who previously rose to the media’s attention through the reality series “Bringing Up Ballers,” has been linked to numerous high-profile relationships.

However, Leia’s most serious relationship was with former NFL star Aaron Bailey. The now-estranged couple is parents to two lovely children: Amari Bailey and Savanna, a.k.a Savvy. Even though the ex-football player is no more in Johanna’s life, their two offspring remain the apple of her eyes. So today, we will look at how Johanna Leia’s daughter, Savvy, is growing up.

Unlike most other celebrity babies, who tend to hide from the mainstream media, Johanna Leia’s daughter, Savvy, is a social media star and does not mind the spotlight. It appears like Leia has been supportive of her baby girl’s love for the limelight.

Despite her young age, Savanna boasts multiple social media accounts. Of those, her Instagram account is the most popular one, with over 2.5K followers and 100 posts. Here, Savvy regularly updates her loyal followers and gives insight into her lavish lifestyle.

Additionally, Savanna is also an avid TikToker. And the little one is not afraid to bust out a few moves to some of her favorite beats. In her TikTok account, we frequently witness Savvy dancing with her friends.

Johanna’s youngest kid, Savvy, is a mommy’s girl. So, the little one does not miss out on the fun when her mother decides to pull off some glamourous attire from her wardrobe. A quick scroll through Leia’s Instagram handle, and we can see how the mother-and-daughter brandish their elegant outfits.

So, time and again, we get to see the mother-daughter duo flaunting matching outfits. And more often than not, little Savvy steals the show from Johanna with her lovely smile and charming aura.

Moreover, as per her Instagram, Johanna is a FashionNova partner and has even secured a deal with Novakids for her daughter. Thus, Savanna has been frequently spotted accompanying her mother, Leia, in several photoshoots.

Well, it seems that the junior is all set to follow in her mom’s footsteps into the world of modeling. In addition, being the daughter of an accomplished model and an entrepreneur, we are confident that Savanna lives a comfortable lifestyle.

Shares A Deep Bond With Her Brother

Since her childhood, Savanna has watched her older brother, Amari, grow up to become one of the top prospects in baseball. And, even though Amari spends most of his time away from home honing his basketball skills, the brother-and-sister duo appears to have a strong bond.

On November 21st, 2021, Savvy shared a photo alongside her beloved brother on her Instagram account, expressing her love for the older one. Amari, who plays for Sierra Canyon’s basketball team, had just signed up with UCLA the very morning. In another one of her posts, Savvy wrote that she has the “coolest brother in the world.”

Watching her brother grow up and prosper in the competitive world of sports must have left an inspiring impact on Johanna Leia’s daughter. Who knows, she might even choose to follow her older sibling’s pathway in the upcoming future?

The name Savanna is of Spanish origin which means Open Plain.