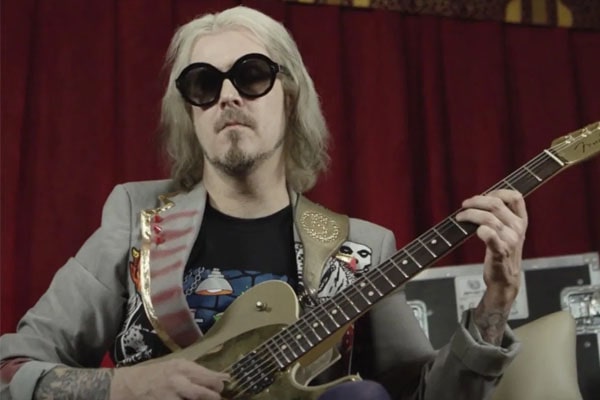 As the title says it all, John 5 is a father of three kids; Nicole Lowery, Jeremy Lowery, and Andreas Lowery. Having this read, you may be wondering what they are currently doing. So, let’s get down to know more about John 5’s children.

Nicole Lowery was born on January 13, 1994. She is John 5’s daughter from his previous marriage. Nicole’s younger brother is Jeremy Lowery.

Well, Nicole is a happily married woman, and the lucky guy is none other than Barry David. The love birds married in March 2018. The couple is expecting their first child soon enough as Nicole is pregnant as of March 2020. John 5’s daughter pursued a normal life and is enjoying her married and subtle life with hubby.

Going through Nicole’s Instagram account, she loves spending lovely times with Barry. She also likes to hang out with her dad, step-mum, and close friends. Therefore, John 5’s daughter Nicole Lowery seems to be well-settled in her life.

As for Jeremy Lowery, he is John 5’s son and was born in 1996. As mentioned above, Jeremy Lowery’s elder sister is Nicole Lowery, and he is also a step-brother to Andreas Lowery. Jeremy also has this immense loving bond with his step-mum, Rita.

Talking about Jeremy’s career, he didn’t follow his dad’s footsteps but pursued a career in the police academy in Los Angeles. John 5’s son graduated top of his class in July 2019 and made all of his family members very proud. Similarly, scrolling through Jeremy’s Instagram account, the LA Police Officer is a body-builder and loves to put on some heavyweights at the gym.

Jeremy Lowery is also in a committed relationship with his girlfriend, Marian Kamille. The lovely couple seems to be so much in love: Jeremy and Marian like hanging out at beaches, celebrations, parties, and whatnot. We hope to see Jeremy and Marian stepping at marriage life soon.

John 5 And His Wife, Rita Lowery’s Son, is Andreas Lowery

Last but not least, another of John 5’s son is Andreas, who was born in 2003. Andreas has been receiving wholesome love from his parents. He and his mom are the best friends, and the mother-son duo seems to love hanging out a lot, and Rita often posts photos of her with Andreas on her Instagram account.

Andreas’ parents never forget to wish him on his birthday every year. With John 5’s promising net worth of $4 million, Andreas is probably living a comfortable lifestyle. Perhaps, he enjoys going to John 5’s tours and concerts as well.

Since, John 5’s son, Jeremy is getting closer to choose a career, it seems like he’s going to pursue a unique career and please his parents by making them proud.

Nicole Lowery – The name, Nicole came from the Greek word, Nicolas formed as the compounds of the words for ‘victory’ and ‘people.’

Jeremy Lowery – Jeremy derived from the Hebrew word, Jeremiah meaning ‘May Jehovah exalt,’ or ‘Exalted of the Lord.’

Andreas Lowery – Andreas refers to ‘manly, brave,’ and it came from the Greek origin.