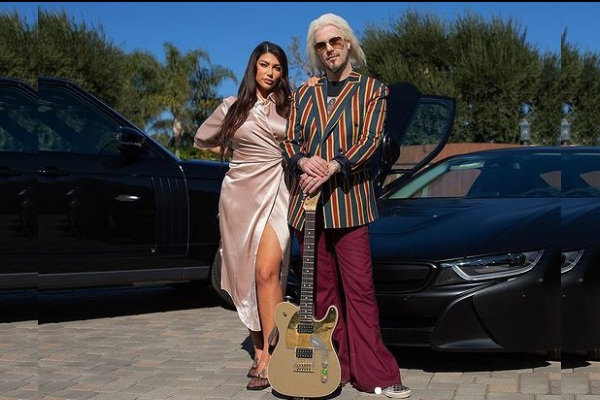 John 5 and Rita Lowery has been married since 2009. Image Source: Instagram/rlowery.

John 5 (John William Lowery) is an American musician currently serving as the guitarist for Rob Zombie. John got the stage name ‘John 5’ when he joined the rock group, Marilyn Manson, in 1998. During his career as a guitarist, he has been involved in a number of bands, namely: 2wo, David Lee Roth, Loser, etc. Apart from that, John has been playing with Rob Zombie since 2005 and also working on a few solo projects.

While John 5 has managed to engrave his name as one of the most amazing guitarists of this century, his fans probably don’t know much about the personal side of this life. Read the article if you don’t want to miss anything about John 5’s wife Rita Lowery.

Rita Lowery Is The Second Wife Of Guitarist John 5

Rita Lowery and John 5 got married on June 7, 2009, and are enjoying a happily married life ever since. Unlike other celebrity couples, there is no news of major conflicts and extra-marital affairs in their case. We’ve mentioned that Rita Lowery is the current wife of guitarist John 5, but what she does professionally still remains a question for you. Continue reading this article to find out.

Yes, Rita Lowery is a hair-stylist. Rita Aghajani started working in the hair industry fifteen-years-ago.  As of now, she is a stylist at Guiseppe Franco’s Salon, a world-class salon in Beverly Hills, California. She specializes in bridal hair, expert color corrections, cutting and styling, highlights and color, and hair extensions. She also owns a hair extension line named Rita Hair by Rita Lowery. There is a wide range of products, including Russian clip-in hair extensions and hair accessories.

With her approach to giving a transformative look to her client, she has always received positive feedback from her clients. Her list of clients includes big names and celebrities, including Camille Anderson, Mickey Rourke, Mena Suvari, Julie Benz, Sylvester Stallone, John 5, and more.

As we’ve already known that Rita lives a luxurious life today. At present, she has all the freedom and fun in life. But things were not always the same for Rita. John 5’s wife Rita Lowery was born in an Iranian family. And what got young Rita and her family into trouble was the Iran-Iraq war. The everlasting war game went on and on and Rita and her family could do nothing else than staying terrorized and hiding under the beds. After 6 years of bloodshed, struggle, and fear, her family finally got the chance to escape Iran and move to the United States in 1986.

This story was disclosed by Rita herself in one of her Instagram posts. She narrated the story while sharing an old photo of herself and her dear sister Reina Lowery. But, like it’s said, “After every storm, there is a rainbow”, Rita’s life also took a turn. Continue reading the article to know about her life today.

Rita Doesn’t Miss Any Chance On Flaunting Her Body

John 5’s wife, Rita Lowery, also owns a curvaceous body and likes to show it off. She flaunts her beautiful body by posting photos and videos on her Instagram handle.

Once, she shared a fourteen-second-long video where she was sunbathing while lying on her sunbed. She made the video joking about internet life whilst also showing her stunning body.

John 5 And His Wife Rita Lowery, Any Children Together?

Guitarist John 5 and his wife Rita Lowery have a son together. They welcomed their first child together in 2003. His name is Andreas Lowery, and he is 17 years old lad now. Even though John 5 remains pretty busy with his works, Rita Lowery does not miss a chance to spend time with her son. She calls him her best friend. Rita often shares pictures of them hanging out and going on outings.

Apart from that, she also has two step-children Nicole Lowery and Jeremy Lowery, from John’s previous marriage. Nicole is now happily married to Barry David, whereas Jeremy is an LA police officer. Rita shares a great bond with her step-son Jeremy.

Over the years, Rita Lowery has been a very supportive wife of John 5 and a good mother to Andreas. We wish this family a lifetime of togetherness.