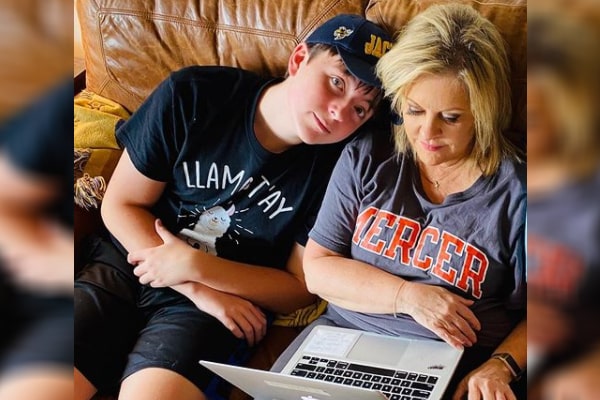 Nancy Ann Grace is an American journalist and legal commentator known for her work in a nightly celebrity news and current affairs show, Nancy Grace on HLN. Besides a successful career as a tv journalist, she also co-wrote a book named Objection!: How High-Priced Defense Attorneys, a 24/7 Media Have Hijacked Our Criminal Justice System, etc.

The former prosecutor in a local district attorney’s office, Nancy, is a doting mother of two children with David Linch. The couple got married in 2007 and welcomed their twin children the same year. In this article, we are trying to shed a little more light on Nancy Grace’s son, John David Linch, and her motherhood.

Older By One Minute

Aforementioned, former prosecutor Nancy Grace exchanged vows with her husband, David Linch, in 2007. The couple welcomed their bundles of joy the same year. Nancy Grace’s son, John David Linch, was born on 4 November 2007. He was one minute earlier than his twin sister, Lucy Elizabeth Linch, born at 1:55 pm. Moreover, John and his sister were born by c-section and delivered early because of Nancy’s developing edema during her pregnancy.

Nancy Grace’s kid, John David Linch, is named after his father David and John the Revelator. Older by a minute, John is very close to his sister, Lucy, and maintains a great relationship with his mother. He is also a frequent face in Nancy’s Instagram.

Although Nancy shares a special bond with her son, John, it’s still quite tricky to sometimes balance work and motherhood. Especially things might get stressful as she delivers terrible news every day. Thus, Nancy vowed to become a better mother and revealed that she wanted her babies to see a happy mom in 2019.

Furthermore, Nancy Grace’s baby boy is athletic and involved in SCOUT. Both John and his sister, Lucy, love being outdoors, fishing, helping people, walking dogs, etc. They do many activities together, but 2020 got better of them as they tested positive for Corona.

Nancy Grace’s Son Contracted Corona Virus Along With His Parents

The global pandemic claimed millions of lives and affected people’s daily lives, forcing them to stay inside 24/7. Although things were turning normal during the late 2020s, the Linch family couldn’t celebrate properly as they contracted coronavirus in December 2020.

According to Daily Mail, Nancy Grace tested positive for the COVID-19 alongside her husband, twins, John David, Lucy, and her mother in December. Additionally, Nancy added that the COVID was no joke. She further added that her family thought they’d done everything right and suggested people maintain social distance.

Furthermore, John David’s grandmother and Nancy Grace’s mother, Elizabeth Grace, was taken to the ER and recovered at the hospital. Likewise, Nancy Grace’s son, John David, and daughter Lucy had mild headaches and sore throat symptoms. The family of four were quarantined at home, where they recovered swiftly.

As of now, John and his family have resumed their everyday lives. Well, Nancy’s son, John, is very young to make his career choices. What do you think will be his career choices? Will he choose between prosecution and business, or will John David alter his career entirely?

The name John has Hebrew origin, which means God is gracious. Similarly, David means beloved and has Israel origin.