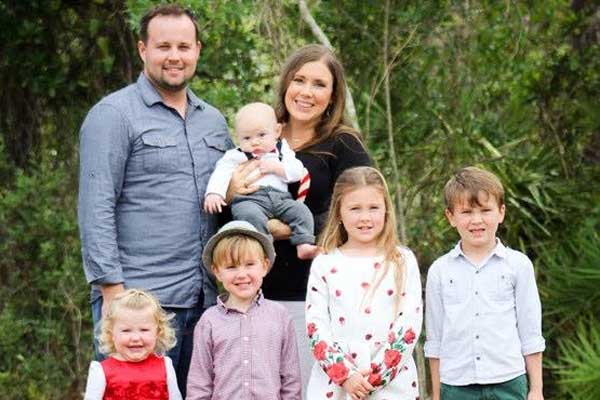 Born as Joshua James Duggar, Josh Duggar is best known as a former American television personality and political activist. His appearance on the Tv-series 19 Kids and Counting was appreciated by all. However, after the show stopped airing, he seemed to have disappeared from the limelight.

Speaking of his marital life, Josh is currently enjoying his marital life with his better-half, Anna Renee Duggar. The couple exchanged their vows on September 26, 2008. Together the pair is proud parents of six lovely children. Josh himself grew in a family with lots and lots of siblings so, it’s possible that he loves having a lot of kids wandering around the house. Whatever the case, Josh and his partner Anna seem okay with it. So, let’s get to know more about Josh Duggar’s children.

Josh Duggar’s son Michael James Duggar, his eldest among boys, was born on June 15, 2011, followed by the birth of his second son Marcus Anthony Duggar on June 2, 2013. His third son Mason Garrett Duggar was born on September 12, 2017. Well, Josh has three men in stand by to follow his command, so life’s good for him.

Speaking of all of Josh’s sons, they have surely inherited their father’s good looks, as every one of them is good-looking. His eldest son Michael is the leader of the boys’ clan, and oh boy, he loves having fun. On the other hand, Michael James shares a lovely relationship with his young siblings. He can be seen taking care of his young brothers and sisters whenever mommy and daddy are not around. An interesting fact about Michael is that he loves playing chess and he is quite good at it too. Also, he inherited Anna’s father and Josh’s Great-Great-Uncle’s name.

All of Josh Duggar’s sons are quite close to him and his wife, Anna. The Duggar family is known for their unique bonding, so we can say Josh’s children must also share a special bond in a unique way. His sons love drawing, cooking, playing, and messing things around as any ordinary kids do.

However, they are no ordinary kids, they are the Duggar, and when a Duggar wants something, they want it! So, then the boys and the girls want the same things, it’s an apocalyptic atmosphere at house. But despite everything, they sure do love each other and have one another’s back.

Josh Duggar’s eldest child is a daughter, and her name is Mackynzie Renee Duggar. So, you know now who runs the house when mom and dad are not around. She was born on October 8, 2009, after Mackynzie, two of her brothers were born, and finally, she got a sister Meredith Grace Duggar on July 19,

Well, the boys were leading by one point, and later on, mom and dad even things out! Josh and Anna welcomed their third daughter and sixth child, Maryella Hope Duggar, on November 27, 2019. Cause she was born a day after Thanksgiving, Josh and Anna decided to name her that.

Now when things are even, the girls are the ones having the upper hand. But when we are talking about their relationship with one another, they share a firm bond. Mackynzie usually takes care of the younglings, and she is like a mother figure to her younger siblings. Whereas Meredith is kind of a farm girl, she loves catching hens and rabbits. She also shares a lovely bond with her elder-brother Marcus, her mother likes to call them the best of friends.

As mentioned above that having little boys and girls running across your house is not easy. But when the odds favor you, you might have a wonderful day. The same case scenario is for the Duggar family. When their kids are not messing around, they are spending time with their parents chilling and hanging out doing nothing. But some of the time, they are somewhere doing something like the time the family went for fishing or the time they all cooked something for mommy.

Mason Garrett Duggar: His first name is of occupational origin, meaning one who works with stone. As for his middle name Garrett, it is of German origin, meaning strong ruler.

Maryella Hope Duggar: Her name is of Bible origin, meaning sea of bitterness or sea of sorrow.