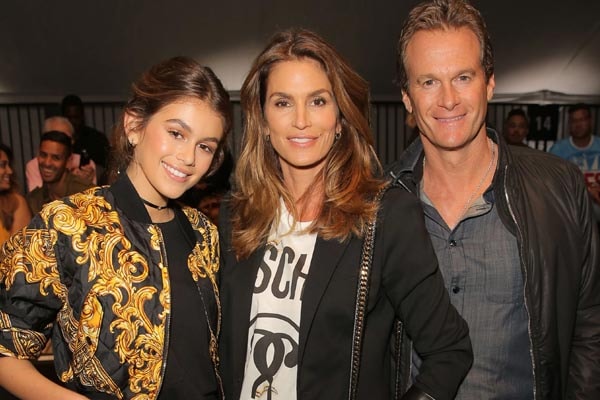 Cindy Crawford‘s daughter Kaia Jordan Gerber was born on September 3, 2001. Cindy had Kaia with her second husband Rande Gerber. Kaia’s father Rande is a popular entertainment industry businessman and formal model, whereas her mother Cindy is a model and actress. She also has one older brother, Presley Walker Gerber who is an aspiring photographer.

Cindy and her daughter Kaia are very close to each other. The mother-daughter duo loves shopping together. and once was spotted doing shopping at the Stella McCartney boutique with two friends in her native Malibu. As for the time being, Kaia Gerber’s net worth hasn’t been revealed but her mother has a net worth $100 million and her father has a net worth $500 million.

The brown-haired beauty Kaia spent her childhood life away from the camera shutters and prying eyes. In spite of the fact that both her parents were busy in the fashion industry, Kaia’s mother didn’t want to encourage her to choose to model as a career. At the age of 10, the beautiful Kaia started her career with the Young Versace. She later modeled for various magazines including Vogue, Teen Vogue, and Pop magazine. Then later on Kaia made her runway debut for Raf Simmons ‘Calvin Klien Collection in 2017’.

Furthermore, Kaia has also been Honored as the Model of the Year at the 2018 Fashion Award. As for now, Gerber is a busy model, but she combines her work with getting an education. She is a junior at one of LA’s high schools. Recently, Kaia has been completing her diploma at Malibu High through an online program.

Kaia Gerber is currently in a relationship with her boyfriend Wellington Grant with whom she flirted at the backstage of Stella McCartney‘s fashion show. Kaia’s partner Grant who is also a model has worked with different modeling agencies in the United States and in Europe.

The beautiful couple was spotted together on Valentines Day in 2019 and were even spotted holding hands in downtown NYC ahead of a fashion week. Let’s see how far the relationship goes on between the pretty Kaia and her boyfriend Wellington.

Kaia was also linked with Jordan Barett. They were once spotted partying together at an event for Paper magazine in early September. However, neither of them confirmed their relationship.

Kaia is a derivation of the name Gaia which means Earth in Greek.