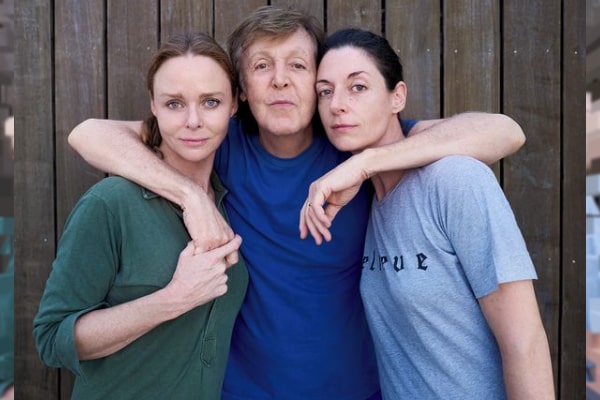 Stella McCartney's net worth is ginormous, thanks to her continuous hard work and never ending passion towards fashion. Image Source: Paul's Instagram.

Born in the McCartney family, Paul McCartney‘s daughter, Stella McCartney, grew up in a happy household and was probably deprived of nothing. However, it did not seal Stella’s career in music. Instead, she chose to build her empire in the fashion world.

Thus, via rigorous hard work, Stella McCartney’s net worth has seen a massive rise through her fashion venture. The renowned British fashion designer started designing clothes at age 13. From acquiring experience from an international fashion house to building her own label, Stella has grown professionally and personally. Here, we shall only focus on her professional worth and her market value in the present day.

Hence, follow the end of the word trail to know if Paul McCartney’s daughter, Stella McCartney is richer than him.

The successful fashion icon Stella McCartney’s net worth has escalated to $75 million since her entrance into the fashion industry. She has been making pretty bucks through her brand and her former ventures as well.

Today, McCartney employs a total of 676 employees in her company and provide them with handsome salary. Furthermore, her stature as a fashion designer continues to rise throughout the years. Its slogan, on her website, states the first vegetarian luxury brand building responsibility into the core of the business. Well, the veteran’s commitment to ethical fashion is what has helped Stella reach the top.

Also Read: Learn How Much Is Nate Diaz’s Net Worth

Earnings From Her Fashion House

Without a doubt, Stella McCartney’s earnings from her fashion designing career aided in building her multi-million empire. After graduating from Central St Martins in 1995, she immediately worked to make a difference in the fashion industry, establishing her signature style, i.e., sharp tailoring.

Furthermore, after two collections, McCartney was appointed the Creative Director of Chloe in Paris and built her impressive resume. She upheld the position as creative director of Chloe until 2001.

She later launched her own fashion label, Stella McCartney, in a joint venture with Gucci, aka Kering Group, in 2001. Furthermore, she showed her Stella collection at Paris Fashion Week the same year. While talking about her deal with Gucci, McCartney seemed pretty grateful. She further revealed that with Gucci, aka Kering, she’d found a partner with the necessary set of skills to build a successful brand.

Here is a list of products Stella McCartney’s fashion house sells along with their price tag.

Ms. Stella McCartney Became A Sole Owner Of Her Company

Moreover, in 2018, Stella chose to acquire complete control of the company purchasing Kering’s 50% stake in Stella McCartney Ltd. Hence, she became the sole owner of her brand after the announcement.

Moreover, both Stella and Kering assured that McCartney would remain a Board member of the Kering Foundation and collaborate closely in a sustainable fashion. Also, Stella released her statement claiming she thought it to be the right time to acquire complete control of the company bearing her name.

Within a year or so, Stella McCartney announced its partnership with LVMH Moët Hennessy Louis Vuitton, the world’s largest luxury group. The deal between the two largest Fashion houses in the world calls for Paul McCartney’s baby girl, Stella, to continue her role as the brand’s creative director. Likewise, she remains the majority owner of Stella McCartney ltd.

Similarly, McCartney also became a special adviser to LVMH’s chairman, Bernard Arnault, and the board on sustainability. Unfortunately, the financial details of the partnership were not disclosed.

On the other hand, during the partnership with Kering, Stella McCartney’s earnings were estimated that the brand had achieved sales of $320 million in 2017.

Stella McCartney not only launched her vegan wears and accessories, but she also collaborated with Adidas and launched sportswear for women. Stella ad Adidas established their long-term partnership in September 2004.

Similarly, the multi-millionaire fashionista Stella announced a collaboration with Disney to create a jewelry collection in January 2010. Again, in August 2019, she teamed up with Taylor Swift to release a fashion line inspired by the American pop icon’s seventh studio album, Lover.

Hailing from a family of music royalty, Stella McCartney caught the eyes of Royal family, Duchess Meghan Markle. Stella designed the halter-style dress for Meghan for her wedding reception with Prince Harry.

Some other icons Stella has worked with include Madonna and Annie Lennox. She further worked with H&M and was later approached by Target as well.

A Massive Advocate of Animal Rights

Along with big bucks comes a responsibility to be a humble human. And, Stella McCartney has just as big a heart as her bank account.

The life-long vegan refuses to use leather or fur in her designs. Thus, she has supported several animal-related charities and foundations like PETA, Oxfam, Greenpeace, Hoping Foundation, etc.

The vegan Frayme bag plays with size, shape and colour for Winter 2021 – with a wraparound, infinitely recyclable aluminium chain and medallion taking cues from brand icons.

Stella even worked with PETA and Atom Cianfarani to petition the British Ministry of Defense to cease using Canadian Black Bears’ fur for their guard’s hats.

Besides animals, Stella also founded Stella McCartney Cares Foundation on 15 October 2018. This charity is dedicated to breast cancer that will donate 1000 of the brand’s Louis Listening Post-operative Mastectomy Compression Bras to women undergoing treatment. She was inspired to start the foundation after losing her mother to the disease in 1998. Additionally, she has also supported several causes, including disaster relief, HIV AIDS, and many more.

Aforementioned, Stella McCartney’s wealth has escalated to $75 million, and her company made an estimated turnover of 170 million euros before signing with LVMH.

Alongside the massive millions, Stella McCartney also lives quite a comfortable life in her luxury house. Unfortunately, Stella McCartney’s house in London caught fire and had to put out the emergency services after it started in her rubbish chute.

Additionally, known for her fashion sense, Stella was massively criticized for her London townhouse as “blah and bland” in 2012. The Notting Hill pad was on the market for  £2.5 million ($3,524,997). The property was initially priced at £2.9 million.

Stella McCartney is continuing to contribute and make a difference in the fashion world since the 90s. Hence, her bank account has seen a significant rise every year. Let’s hope the business flourishes more, allowing her to work on several good designs. And while she has amassed a fortune, Stella is yet to reach her father Paul’s level, who is a billionaire.