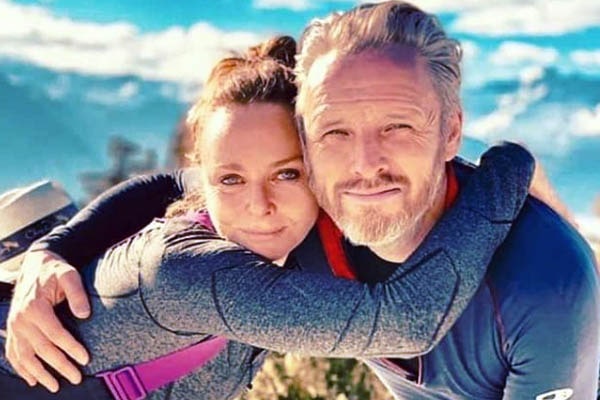 Stella McCartney and Alasdhair Willis are together since 2001. Image Source: Social Media.

Stella McCartney is not just famous for being the legendary English musician Sir Paul McCartney‘s daughter with his late wife, Linda McCartney. She has achieved great success in the field of the fashion industry as a designer. Stella began designing clothes at the young age of 13, worked for the celebrity French designer Christian Lacroix at 16, and became a creative director of the French luxury fashion brand Chloe at 26. Currently, Stella McCartney is a celebrity fashion designer who operates over fifty clothing, shoes, accessories, and perfumes stores in different parts of the UK and the USA.

The receiver of numerous Designer of the Year awards, Stella McCartney is a married woman. Her husband, Alasdhair Willis, is also a fashion expert like his wife. The prestigious footwear manufacturer Hunter Boot Ltd. hired Willis as their creative director in 2012. Here, learn more about Stella McCartney’s husband, Alasdhair Willis, and also, know if he is still serving in Hunter or has already resigned.

The 2009 Glamour Woman of the Year, Stella McCartney’s husband, Alasdhair Willis, became the new creative director of Hunter Boots Ltd. from the end of 2012. Over one and half-century-old Scottish wet-weather brand famous for its staple Wellington boot, Hunter hired him to transform it into a 21st-century fashion powerhouse.

The former fine-art student at the Slade School of Fine arts, Alasdhair Willis, created Hunter’s first show at London Fashion Week in collaboration with Gainsborough & Whiting Company. Also, he collaborated with Checkland Kindleysides to design the brand’s first flagship store in London. Moreover, he worked with Checkland to establish another store in Ginza, Tokyo.

Furthermore, Stella McCartney’s husband, Alasdhair Willis, led a complete remodeling of Hunter’s website, making digital communications a key priority. Much of his work focused on refining the brand’s positioning. He divided Hunter’s products into two key lines; products for more fashion-conscious consumers and traditional customers looking for robust and more downplayed wellies. Willis may have transformed Hunter’s image, but he never led the brand too far from its country roots.

However, the founder of a furniture design company, Established & Sons, Alasdhair Willis, officially stepped down from his role as Hunter’s creative director on 31 July 2020. But, he remained the senior advisor to Hunter’s umbrella company and its majority shareholder, Atypical Partner. After resigning from Hunter, Alasdhair is currently focusing on his existing brand consultancies, his board roles, and developing new opportunities for young designers.

Married To Stella McCartney Since 2003

Stella McCartney married the former publishing director of Wallpaper magazine, Alasdhair Willis, on 30 August 2003. Their wedding ceremony took place at Mount Stuart House on the Isle of Bute. Willis’ bride, McCartney, wore an updated version of her mother, Linda McCartney’s 1969’s wedding dress while walking down the aisle with him.

ALSO READ: Know If Lee Starkey and Jay Mehler Are Still Together Or Already Separated

The beautiful couple, Stella McCartney and Alasdhair Willis met for the first time when Willis was hired to consult on McCartney’s business in 2001. Willis describes their first meeting as love across a breakfast table. The couple had a breakfast meeting at one cafe and soon that after afternoon he proposed his sweetheart and she said Yes.

Stella and her husband, Alasdhair Willis, are happy with their marital relationship. They really enjoy each other’s company and are more best friends than husband and wife. The romantic pair loves hanging out together, and their love for one another is growing with time.

Father Of Four Kids With McCartney

Over the decades-long marriage of Stella McCartney and Alasdhair Willis has not just given them marital bliss but also made them proud parents to four kids. Stella and Alasdhair together have two daughters and two sons. The husband-wife duo welcomed their first child, son Miller Alasdhair James Willis, in 2005. Similarly, their second son, Beckett Robert Lee Willis, arrived in 2008. Stella McCartney’s daughters, Bailey Linda Olwyn Willis and Reiley Dilys Stella Willis joined later in 2006 and 2010, respectively.

Despite their busy schedules, the doting parents of four Stella McCartney and Alasdhair Willis give enough time for their kids. While talking with the NY Times, Willis said that he loved playing sports on the weekends with his kids. However, at present, he spends most of his time driving around, negotiating the logistical problems of getting his four kids to their four different activities. Their highly active children are outdoor enthusiasts. They love mountain climbing, football, horse riding, and many more. None of them is a bookworm.

Currently, Stella McCartney and her beloved husband, Alasdhair Willis, live a happy life in West London and sometimes in the countryside with their four youngsters.