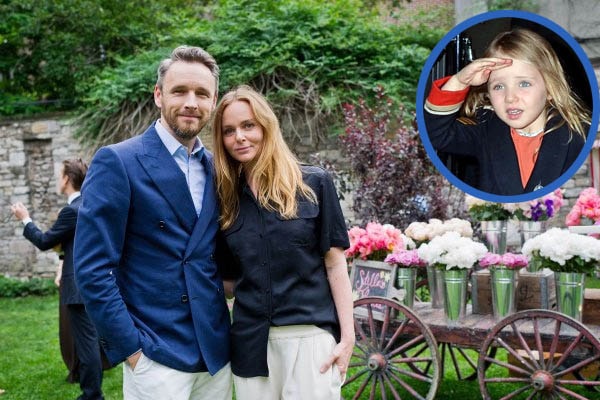 Bailey Linda Olwyn Willis is one of the four kids of the famous fashion designer Stella McCartney with her husband of over a decade, Alasdhair Willis. Both of her parents are successful British entrepreneurs. Stella McCartney, daughter of Beatles’ Paul McCartney, first worked as a creative director of Chloe in Paris. Currently, she runs more than fifty fashionable clothes, perfumes, and accessories stores in different places in the UK and USA. Similarly, her husband of over a decade, Alasdhair Willis, is a former creative director of Hunter Boots Ltd. and now focusing on his existing companies at the moment.

Celebrity designer Stella McCartney and senior advisor of Atypical partner Alasdhair Willis tied their marital knot in 2003 and are together ever since. The longtime husband-wife duo, McCartney, and Willis are doting parents to four children, including a daughter, Bailey Linda Olwyn Willis. Here, learn some more unrevealed facts on Stella McCartney’s daughter, Bailey Willis.

Has Two Younger And One Elder Sibling

The beautiful couple, Stella McCartney and Alasdhair Willis gave birth to their daughter, Bailey, on 8 December 2006 in London. The People magazine notes that Bailey weighed 7 lbs 14 oz at the time of her birth. She is the first daughter of her parents and the fourth grandchild of her granddad, Paul McCartney.

Stella McCartney’s daughter, Bailey Willis, has an older brother named Miller Alasdhair James Willis, born a year before her on 25 February 2005. Similarly, she is the big sister of Beckett Robert Lee Willis, born in 2008, and Reiley Dilys Stella Willis, born in 2010. Bailey’s parents named all three of her siblings after her family members. Likewise, they also gave her middle name after her granny, Linda McCartney.

Bailey, Stella McCartney’s daughter, is very close with her siblings and her cousin brothers and sisters. Beautiful Bailey enjoys spending time with her siblings and is a keen adventurer. She loves activities like rock climbing, horse riding and also shows interest in sports. Bailey is more a venturesome girl than a bookworm.

An Inspiration Behind Her Grandad’s Children Book

Bailey Willis’ granddad, the legendary English singer, songwriter, and producer, Paul McCartney, released a book named ‘Hey Grandude’ in 2019. McCartney worked with the Canadian illustrator Kathryn Durst to put forward the picture book hoping young and old will enjoy reading together. He has also narrated the book’s complete audio version with an instrumental soundtrack. And McCartney says that his grandchildren, including his daughter, Stella McCartney’s daughter, Bailey Willis inspired him to write the book.

According to Paul, once one of his grandkids who used to call him Granddad just happened to say him Grandude. So, from then, Bailey and his other grandchildren began calling him Grandude instead of Granddad or GrandPa. It gave Paul McCartney the idea for his latest project, a children’s book ‘Hey Grandude.’

Stella McCartney’s daughter, Bailey, shares a great bonding with her celebrity granddad. She loves spending quality time with him discussing various topics and listening and playing guitar. Moreover, Bailey shares her grandpa’s love of music and can also hold a tune.

ALSO READ: Know If Jay Mehler And Lee Starkey Are Still Together?

Her Parents Prefers Her To Be Far From Paparazzi

Stella McCartney never hesitates to share her professional life through her social media handles and in media interviews. But, she is very strict concerning the privacy of her daughter, Bailey, and other kids. McCartney rarely appears in public with Bailey by her side. However, in such a rare appearance also, she makes sure that the media paparazzi does not capture her girl in their camera.

Moreover, Bailey’s parents rarely post any information or photos of her online. So, for now, Stella McCartney’s daughter with her husband, Alasdhair Willis, Bailey Linda Olwyn Willis, lives a secretive life away from the excess media scrutiny.