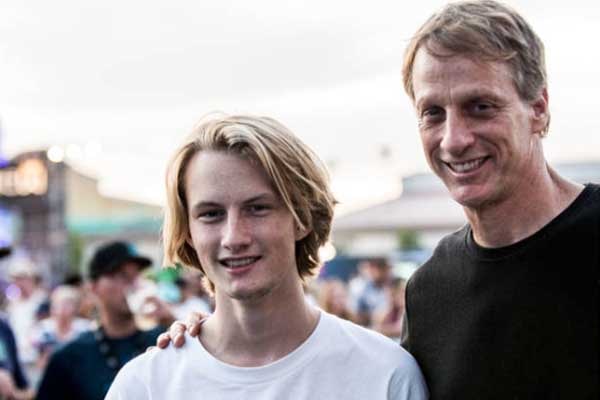 Keegan Hawk is the second son of legendary skateboarder Tony Hawk with Erin Hawk, born on July 18, 2001. He has a brother named Spencer Hawk, a half-brother Riley Hawk and a half-sister Kadence Clover Hawk.

Tony Hawk’s son Keegan Hawk has inherited not only his father’s good looks but also his passion for skateboarding. He is not only into skateboarding but also into photography and a bunch of other cool stuff. So, let’s get to know a lit bit of Tony’s son Keegan.

As addressed above that Keegan has inherited his father’s skateboarding genes, which he is surely putting in use. He can often be seen skateboarding with his father and close friends. However, he hasn’t made it clear that he wants to become a professional at it. Well, we can only assume he will continue his father’s legacy.

Furthermore, Tony Hawk’s son Keegan Hawk also shares a lovely relationship with his elder-brother Spencer. Both can be seen spending time with their father and step-mother Catherine Goodman.

When Tony’s kids were tiny, he used to carry them around, when they grew, they followed him around now they are making their own way. Tony must be really proud of his boys.

A rather amusing thing that happened with Tony’s son Keegan was that he once found his father’s sex tape. He was seventeen at the time. The story goes like this. When Keegan’s dad was out of town, he went into his father’s room to look for a phone charger. He noticed a strange yellow glow coming from the top of the dresser. It took him a little while to figure out how to get up there, but once he did, he found this beat-up VHS tape kind of floating around.

Keegan thought that he found his father’s skateboard video, but oh boy, he was up for a surprise. He was so sure that he found a relic of his father from the golden age of skateboarding that he invited his friends over to watch it together.

However, Keegan was left shock when he played the VHS tape. As soon as the video began, he shouted, “This isn’t skateboarding, This is my dad boning a bunch of ladies! Everybody has to go home right now!”

Soon the news of the Birdman doing nasty stuff spread like a fire on social media. At the time being Tony was in England for a series of promotional appearances. He was left shock when asked about the hidden tape.

Tony, along with his family, appeared on the show Family Feud, the one hosted by Steve Harvey. Keegan was fourteen at the time, and during a segment called Fast Money, he was able to score 71 points. Later assisted by father Tony, the father-son duo won the $25K prize money.

It wasn’t the first time that the father-son duo had done something together. As mentioned above, Tony Hawk and his son Keegan Hawk often spend a significant amount of time with one another. They also go on vacation and trips where they surf, ski, rock climb, skate, and, most importantly, spend quality time with one another.