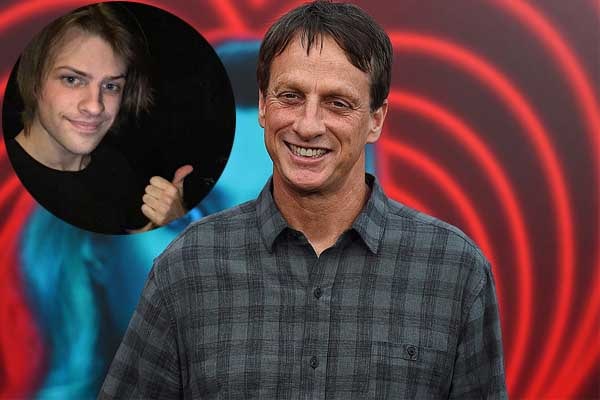 Born Anthony Frank Hawk, Tony Hawk is a former American professional skateboarder, actor, producer, stunt man, and owner of Birdhouse, a skateboard company. Not only that, but he is also a proud father of four children, Riley Hawk, Keegan Hawk, Kadence Clover Hawk, and Spencer Hawk.

Tony Hawk has fathered three sons and a daughter with three different women. He fathered Riley while he was married to Cindy Dunbar on December 6, 1992, whereas he fathered two sons with Erin Lee, Spencer, and Keegan. Tony Hawk’s son Spencer Hawk was born on March 27, 1999, followed by the birth of Keegan on July 18, 2001. As for Spencer’s half-sister Kadence, she was born on February 7, 2011.

Spencer Hawk is an electronic music artist, DJ, and producer famed under nickname Gupi. Unlike his father, who was a professional skateboarder, he chose to become a musician. He began his music career in 2015 by recording debut EP titled Super Cool. To date, he has more than ten albums credited under his name. Thos Moser, Delusion, and Paradise are some of his most popular albums. His songs are also available on Soundcloud, iTunes, Spotify, and YouTube. His YouTube Channel’s name is Dog Show Records, do check it out.

Tony Hawk’s son Spencer Hawk composes his music himself. Well, on March 3, 2020, he posted a short clip of his first effect chain tributing it to his mother.

Look mom I made my first effects chain pic.twitter.com/JBZoTB8S1y

Furthermore, Spencer is currently working on his new album, which he announced not so long ago. So, for the time being, Tony Hawk’s son Spencer has made a couple of remixes of his old song to keep his fans busy. So, if you do want to listen to remixes of his songs, it’s available on SoundCloud.

It must not come as a big surprise that Tony is a really supportive dad. Unlike some dads who want their kids to follow their footsteps, Tony is a broad-minded guy and supports all of his children’s decisions.

Speaking of the father-son duo, they share a lovely relationship with one another. They love spending time with one another skateboarding or just having a couple of drinks, chatting usually. Tony was also present there on Spencer’s graduation, which shows how much of a responsible father he is.

Everyone knows how much of a cool and adventurous person Tony is; his son Spencer too, has inherited his father’s cool and adventurous nature. He adores hanging out with his friends and fellow band members, Dog Show Records. Not only that, he loves skateboarding with his father, Spencer was present at the time his father did his first 900 and was there when he did his last.

Loves Spending Time With His Family

Music is his passion, but his family is his life, and Spencer is amongst those who know how to separate his work life from personal. We can often see him spending time with his siblings and step-mother Lhotse Merriam. He was once spotted in Manhattan with his father, step-mother, and half-sister Kadence.

Furthermore, Spencer shares a special bond with his brother Keegan, they can often be seen spending time making their brotherly bond even stronger. While they were both kids, they were often seen beside their dad following him around, but now they are grown man and have made their own ways. Father Tony must be proud of his sons and how things turned out for them.