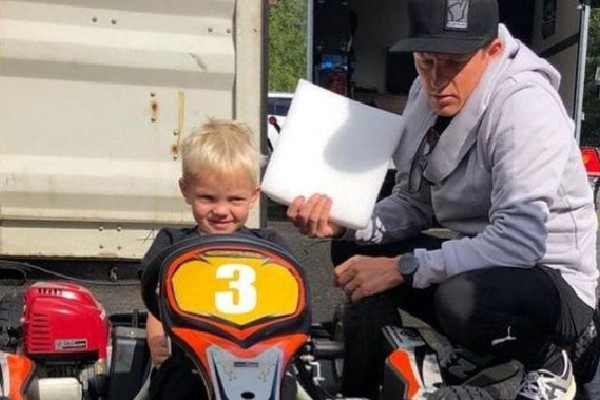 One time Formula One Championship winner Kimi Räikkönen is a Finnish racing driver who currently drives for Alfa Romeo Racing under the Finnish flag. Kimi won the championship back in 2007 when he was racing with Scuderia Ferrari. He is one of only five drivers who have finished on the podium more than 100 times. Räikkönen was also the overall second in 2003 and 2005, and third in 2008, 2012, and 2018.

Kimi definitely has been a top-notch performer in his sports for more than a decade. With comparisons drawn with the 1976 world champion James Hunt for his ‘playboy’ lifestyle, Kimi now seems to have settled down with his wife, Minttu Räikkönen. The couple is parents to two children, a son and a daughter, Rianna Angelia Milana Räikkönen, but in this article, we would only be focusing on Kimi Räikkönen’s son Robin Räikkönen.

Kimi Räikkönen’s eldest child, Robin Räikkönen, has already started to follow in his dad’s footsteps by making his karting debut. Back in 2019, Kimi posted some photos and videos of Robin in a kart with the caption ‘Aceman Begins.’ The five-year-old debuted on a wet surface, but he looked pretty confident in his first drive. Kimi had previously mentioned in an interview at Azerbaijan Grand Prix that Robin liked to ride a mini motorbike with a modified throttle to stop him from going too fast, and he was thinking of letting Robin ride some Kart pretty soon.

The little Ice Man looks pretty sharp at such a young age, and with the guidance from his dad, Robin is destined to have a bright future. The only thing that can be a bummer is kids’ interest can fluctuate a lot, so let’s see what sort of interest Robin develops over the years.

Räikkönen Jr. Is Already Beating His Dad On The Racing Track

After almost a year of making a debut in Karting, Kimi Räikkönen’s son Robin is already beating his dad on the racing track. During the break caused by the COVID-19 pandemic, Kimi spent his days practicing his son and also polishing his young child’s karting skills. In a video shared by Räikkönen’s wife, Minttu, the iceman was seen racing with his son on a rental karting track, but he was not the main highlight of the race. Robin was the one who was in the spotlight as he beat his dad in the race. Of course, Kimi was not taking the race seriously, but even so, Robin seems to have a natural talent when it comes to racing.

Kimi Now Understands His Parent’ Concern Over His Racing

After his son Robin started karting about a year ago, Kimi has finally realized his parents’ concern over his thrill for racing. In an interview with Yahoo Sports, Kimi mentioned how his life has changed after becoming a father. He now feels the same way his parents’ felt when he first started racing. The 41-year-old sure has some important tips to pass down to his son.

Robin Is Really Close To His Father

A parent-child relationship is really a special one, and we can see one of the finest examples of this playing out through the bond between Kimi and Robin. The 5-year-old is always excited to spend time with his father, from being with him during races to racing karts with him. As his uncle, Rami Räikkönen is also involved in race car, he must be close with him. Robin is also proud of his father and loves to watch him race. He is always the first one waiting for him at the door when Kimi gets back from racing.

Well, Robin is really getting the care he needs from his father, who is currently the oldest racer on the track. If Kimi continues to race like this for some more years, there is always a possibility to see the father-son duo race as partners. Kimi also joked on his Instagram post that he and Robin would be partners in 2035.

Robin Räikkönen also has a fan account dedicated to himself. The sheer amount of attention this kid is grabbing at such a young age is pretty mind-boggling. Kimi must be blessed that he got such a charming little son in the form of Robin.

Kimi Räikkönen’s son, Robin, is just five now, and there is still a lot of time left before he decides to choose a career for himself. Regardless of what he chooses, he is destined to get all the love and support from his parents. Well, with that said, let’s hope we see him take on his dad’s mantle and become a world champion.

Robin is a Germanic name derived from the prefix Ro from old Germanic, which means ‘fame’ and ‘berht,’ meaning ‘bright’.