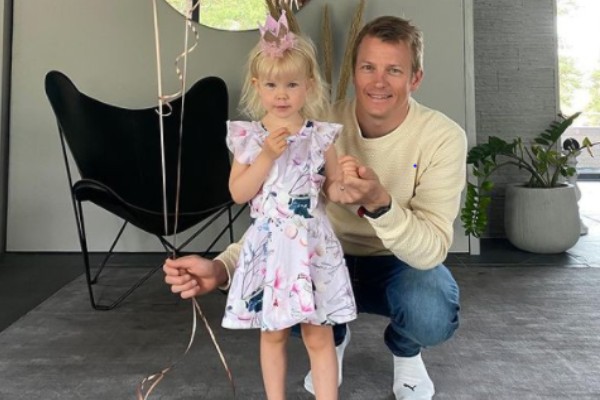 Kimi Räikkönen is a Finnish Formula one driver who currently drives for Alfa Romeo Racing. The One time Formula One Championship winner won the championship back in 2007 when he was racing with Scuderia Ferrari. He was also the overall second in 2003 and 2005, and third in 2008, 2012, and 2018 while also being one of only five drivers who have secured a podium finish more than 100 times.

While Kimi’s career remains his major set of attention, his personal life is also nothing short of headlines. The driver was often compared with 1976 championship winner James Hunt for his playboy lifestyle, but he seems to have finally settled with his wife, Minttu Räikkönen. The couple gave birth to their second child Rianna Angelia Milana Räikkönen, in 2017. While son Robin Räikkönen has already started to follow his dad’s footsteps, why don’t we take a look at Kimi Räikkönen’s daughter Rianna Räikkönen?

Soon after his son Robin made his karting debut, Kimi Räikkönen posted on his Instagram that his daughter Rianna will likely follow her big brother pretty soon. Rianna celebrated her 3rd birthday in May, and as Robin made his karting debut when he was four, we may very well see Rianna taking on the wheels next year. Kimi seems to be a big fan of making his kids take on what he will leave. Even though he has a sense of concern about the risks involved in racing, he will not let that overcome his kids’ wishes.

Kimi is a family guy and spends quite a lot of time with his baby girl Rianna. Rianna also tags along with him during his races and must have learned quite a lot from him and her older brother. The three-year-old must be itching to get into the track and be like her brother and her father. Kimi Räikkönen’s daughter, Rianna, sure is lucky that she will get to learn from one of the best drivers, Formula One has ever seen.

Kimi Posted A Hilarious Warning For His Daughter

As we mentioned earlier, Kimi is a family guy and spends a lot of time with his family member. Similarly, the F1 legend shares quite a lot of photos from the time he spends with his family on his social media accounts. Recently in the New Year celebration, Kimi posted a picture kissing his wife Minttu while the two kids were busy looking at the camera. But the thing that grabbed the audience’s attention was the caption in which Kimi hilariously asked her daughter not to do what her parents were doing in the photo before the year 2035.

It is hilarious how he gave a subtle warning for his little sweetheart. Well, there is still quite a lot of years till we reach 2035, and Kimi Räikkönen’s little one, Rianna Räikkönen, is destined to get all the tips and encouragement from her parents by then. Although nobody knows whether she will follow her dad’s footsteps or not, we know for a fact that Kimi will support her to do whatever she likes.

Rianna Loves To Spend Time With Her Family

Rianna is always close to her parents. The three year-old is specially close to her father even more and can be seen with him from race track to sepnding casual time at home together, The parent-child relationship between Rianna and Kimi is surely out of the ordinary. The two are inseparable and Rianna also looks upto her father in a proud sense.

Kimi is making sure that his daughter gets proper nourishment during her growing days and is inspiring her to do whatever she is interested in. Let’s hope we will get more of these cute moments of Kimi spending time with Rianna in the future.

‘Rianna’ is a variant of the Welsh name ‘Rhiannon,’ which means ‘great queen’ or ‘goddess.’ The middle name ‘Angelia’ is the name of Greek origin, and it means ‘messenger of God.’ Whereas Milana is an Italian name meaning ‘fashionable lady.’