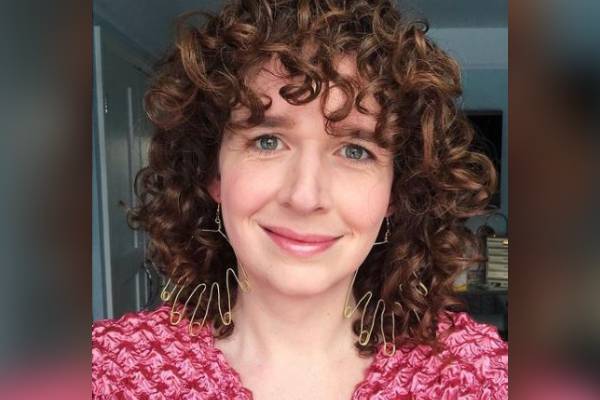 Kinley Mochrie is the lovely daughter of famous Canadian comedian Colin Mochrie and his wife, Debra McGrath. Colin’s fans are curious to learn more about his family.

Therefore, learn in detail about Colin Mochrie’s daughter, Kinley Mochrie, and her whereabouts.

Colin Mochrie and Debra McGrath share a blissful marital life since January 8, 1989. Since then, their marriage has remained the same and strong. In more than three decades of togetherness, the lovely pair welcomed a daughter, Kinley Mochrie, on September 3, 1990.

They both raised their children with immense love and care.

Is A Transgender Woman

Colin Mochrie and Debra McGrath‘s daughter, Kinley, is a transgender woman. She came out to her parents saying she is a trans woman with the name Hannah and prefers she/her pronoun. However, she only transitioned with the support of both Colin and Debra.

Similarly, a year later, her dad tweeted about her daughter, saying his 90-year-old mother-in-law and 87-year-old mother has shown acceptance and love to his trans daughter, which has warmed his heart. Furthermore, he also questioned why some younger couldn’t accept trans people.

My 90-yr-old mother-in-law and 87-yr-old mother love and acceptance of our trans daughter warms me. Wonder why some who are younger can’t.

Colin Mochrie’s daughter, Kinley, had come out as bisexual a few years ago and even had a girlfriend of four years. She asked her parents to pitch names from their Scottish and Irish backgrounds. They presented 40 names, and later, she decided on Kinley or Kin for short.

Her Father Shut Down Trolls

In September 2018, Colin wished his daughter, Kinley, a happy birthday. However, the comment section of his post began to fill with hateful comments from the anti-LGBTQ community.

The next day, Kinley Mochrie’s dad, Colin, fired back at the hateful commentators with a great comeback. He wrote a post saying thanks to the fans of his page for being human and supportive. He added that his thoughts and prayers to the trolls whose mind and soul had left their body tragically.

Several people appreciated his post, and the post garnered hundreds of comments and more than 6,000 reactions. Many of his fans thanked him for supporting his daughter and the whole trans folks. Kinley’s dad openly talks about his support for her and transgender rights.

Colin Mochrie and Debra McGrath’s kid, Kinley Mochrie, is also an actress, just like her mom and dad. Growing up with her parents engaged in the acting profession might have inspired her to follow in her parents’ footsteps.

As per IMDB, Kinley has 13 acting credits to her name. She performed as Luke Mochrie in several projects like The Magical Gathering. Agent 56, Phelous & the Movies, The Nostalgia Chick, and many others.

Furthermore, Mochrie is well-known for her role in movies and television series like To Boldly Flee, Suburban Knights, You Can Play This!, and The Nostalgia Chick. Since she was involved in all of these projects before transitioning, she was credited as Luke.

Although Colin Mochrie’s daughter, Kinley, has not acted in as many movies and television series as her mom-dad, she might have achieved significant success from those that she has worked on. Furthermore, she is still active in her career; thus, there’s no doubt that her fame and fortune might increase in the future.

Has Spoken About Transgender People In Several Interviews

Colin Mochrie and Debra McGrath’s daughter, Kinley Mochrie, has actively talked about the LGBTQ community on her social media. Furthermore, she has also shared her experience as a transgender woman in several interviews. Her dad also accompanies her to support her in these shows.

In 2017, Kinley and her dad gave an interview where they discussed gender transition. Similarly, her parents also accompanied her to a protest at Queen’s Park in July 2018. The protest was conducted for calling on the new PC government to re-think its decision to replace the sex education curriculum.

Going through her Instagram, we can see that she actively speaks for the LGBTQ community.

While Kinley has not been as active in her career as before, we wish her all the best in her future endeavors. And let’s hope we get to learn more about Colin Mochrie’s daughter, in the coming days.

The name Kinley has an Irish origin, and it means “Fair-Haired Viking.”