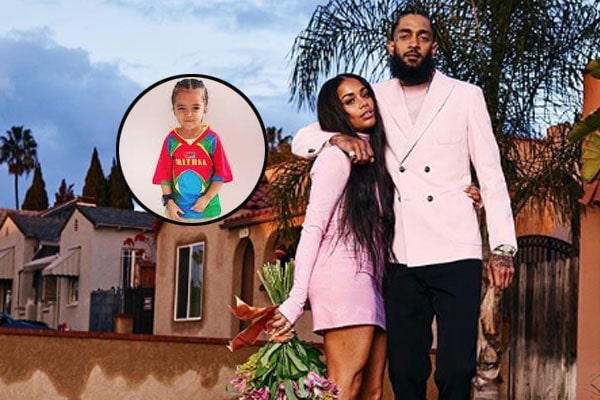 On Aug 31, 2016, Nipsey Hussle and his longtime girlfriend, Lauren London, welcomed their son Kross Asghedom. Both Nipsey and Lauren have children from their past relationships.

Nipsey also has a daughter named Emani Asghedom, with his ex-girlfriend Tanisha Asghedom and is Kross’s half-sister. Kross also has an elder half-brother, Cameron Carter, who is Lauren’s son with rapper, Lil Wayne.

Kross’ dad, Ermias Asghedom, aka Nipsey Hussle, was a famous American rapper. Nipsey once was also a member of a then local gang, Rollin 60’s Neighborhood Crips. Sadly, he passed away on March 31, 2019, after a shooting near a clothing store he owned in LA, California. Whereas his mom, Lauren London, is an American model, television personality, and actress.

Gorgeous Lauren London celebrated her son, Kross’s 3rd birthday in 2019. She shared a sweet tribute to her youngest son as they marked his third birthday. Kross’s mom posted photos of Kross donning an oversized baseball cap, and also a photo of him as a baby where Lauren leans in to kiss him.

She captioned her photo saying,

“Today is my warrior baby’s 3rd Birthday. Kross Ermias Asghedom. You are the Light that shines in darkness, you are everything we prayed for and more. Continue to shine Sun.”

Also, birthday wishes and messages from celebrities like Cassie, Busta Rhymes, La La Anthony, and Naomi Campbell for Kross flooded in the comments on London’s post.

Similarly, she frequently keeps on posting her sons’ photos on her Instagram. After her partner’s death, Kross’s mom is single-handedly taking care of Kross and his brother, Kameron.

The day, Mar 31, 2019, was an emotional trauma in the music industry when everyone had to learn about rapper, Nipsey Hussle’s death. He was shot at least ten times in the parking lot of his clothing store, Marathon Clothing, in Los Angeles.

Two others were wounded during the shooting incident. All three victims were transported to a hospital, but Hussle died on the spot at 3:55 pm. Eric Ronald Holder Jr. was accused of killing him and injuring two men. May Nipsey ‘rest in peace’ in heaven.

It is depressing for Kross that he did not get to spend more time with his dad. He will always remember his father in every step of his life. Perhaps Nipsey Hussle is looking and smiling at adorable Kross and growing up, from the sky.

Nevertheless, Kross’s mom, Lauren, is doing everything she can to make him happy all the time.

According to The Blast, Lauren London expected her son to inherit $1 million from the late rapper’s estate in July 2019. It’s also said that she filed for establishing guardianship of her little son, Kross Asghedom.

She also wrote that Kross was ‘anticipated to inherit approximately One Million Dollars at the close of’ Nipsey Hussle’s estate.

The name Kross is a metonymic occupational name that was given for a maker of jugs and mugs.