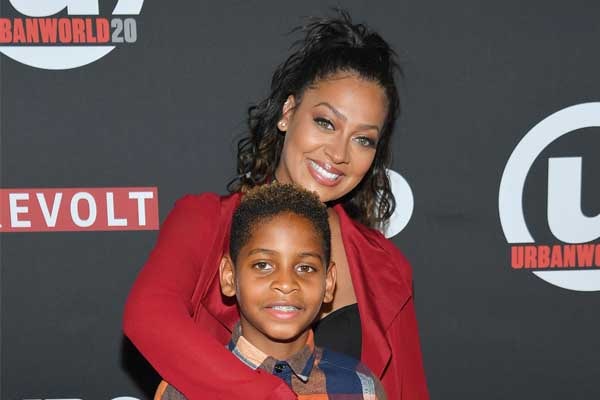 Kiyan Anthony was born in Denver, where his father was playing for the Denver Nuggets. His mother is a popular actress, as for his father Carmelo, he is a basketball player. You can say he is following his father’s footsteps. He previously attended The Calhoun School in New York. Getting that out of the way, let’s get to know more about La La Anthony’s son.

Being born in a house with celebrities as parents is never an easy job. People have high expectations from you, but to date, it seems like it has worked out just right for Kiyan. He has somewhat of a mixed life, sometimes living life as a star kid and other, like any other kid down the street. He attends events and seminars with mom, whereas showing up with dad on his basketball games.

As seen in many pictures online, Kiyan seems to share a really healthy relationship with both of his parents. Like every husband-wife, La La and Carmelo Anthony have some misunderstandings between them, but they have never let that hamper their son. There is news all over the Internet that the couple is about to separate. And like every news related to celebrities, it has not been confirmed yet, but the couple has made one thing clear that they are for sure co-parenting their son Kiyan.

Being the son of a well-known basketball player, Kiyan has been spotted attending many basketball games. Many times he has accompanied his mother to support his father during his matches. Also, as the only child of actress La La Anthony, he was also seen supporting his mother at the season finale premiere of the hit series, Power, at Madison Square Garden.

When Speaking of his public appearance, we can’t exclude the moment he first accompanied his mother on the Red Carpet and the 2018’s US Open Tennis Championships. We can say for sure he loves accompanying his mother on public events.

Following In His Father’s Footsteps

As the saying goes, ‘Like Father Like Son’, Kiyan seems to inherit his father’s talent in playing basketball. Following in his father’s footsteps, Anthony was seen in court with his fellow teammates in an intense game. In a video posted by his father, Carmelo, on Instagram, Kiyan demonstrated excellent techniques as well as a lot of tricks, just like his father.

After watching this clip of the 12-year-old, many people commented on the exceptional skills possessed at such a young age. Some viewers even predicted that Carmelo Anthony’s son Kiyan Anthony would be one of the best NBA players in the future. Looking at the video, we can say that if he chooses to follow in his father’s footsteps, Kiyan would surely take the basketball scene by storm.

Along with his father’s talent as a basketball player, Anthony seems to also inherit his mother’s acting abilities. He appeared in a Jordan commercial alongside his father. Released in 2016, the commercial showed young Kiyan encouraging his dad after he seems to be worn out. While Kiyan himself didn’t show off any moves, we know that he does have skill just like his dad, and maybe one day, we will also see him in big screens just like his mother.

It looks like Kiyan has a very bright future, whether he chooses to follow his mother’s footsteps and start acting or become an NBA player like his father. Nonetheless, we, as viewers, would be happy to see La La Anthony’s son Kiyan Anthony succeed in life.

Carmelo Anthony’s son Kiyan Carmelo Anthony’s first name is of Arabic origin, meaning being, entity, or existence. As for his middle name Carmelo, it is of Hebrew origin, which means Fruitful orchard.