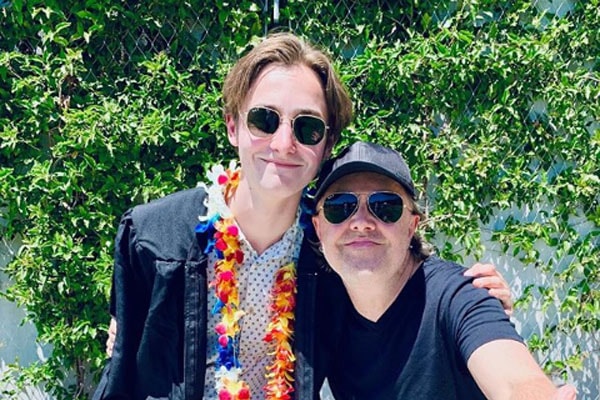 Born on May 6, 2001, Layne Ulrich is Lars Ulrich‘s son with ex-wife Skylar Satenstein. Layne Ulrich has an elder brother named Myles Ulrich and a small half-brother named Bryce Thadeus Ulrich-Nielsen. The handsome Layne is so much like his dad because he also has a passion for soulful music.

Layne’s dad, Lars Ulrich is a Danish musician, songwriter as well as record producer. He is worldwide recognized as the drummer and co-founder of the American heavy metal band Metallica. Unlike his dad, Layne’s mum is a physician and cosmetic surgeon.

Giving a glimpse at Layne Ulrich’s Instagram account, he has posted numerous videos of him playing musical instruments such as bass guitar and piano. But, first and foremost, Layne loves to play the bass guitar. As said earlier, he is way cool just like his dad and has a great passion for music.

Since Lars Ulrich is a legendary artist and musician, Layne might have been lured by his dad’s career and talent. So, maybe Layne had a dream to become the maestro at playing musical instruments. Although his dad is a great drummer, he went down to choose a bass guitar.

He often does covers of classic songs and makes awesome and soothing music. Looks like Layne has already stuck an aim to master the art of music. Perhaps his dad is his role model from which he got a lot of inspiration and admiration.

Furthermore, the instruments are his best buddies in his life. The handsome and talented Layne might bloom into a famous artist in the future and the day it happens Lars Ulrich’s eyes would fill with tears of proudness and happiness.

Unconditional Love Between Father And Son

Lars Ulrich and his son, Layne Ulrich have that bond of love where they seem to be more of friends than father and son. The father-son duo is like best pals indeed. Lars Ulrich even posted a photograph of him with Layne wishing him on his 18th birthday.

Layne surely respects his dad for doing everything to make his life a wonderful one. Let’s hope we see Layne doing concerts with his dad someday close. It would be an extremely great day to see the legendary Lars Ulrich performing with his son.

The name Layne came from the French word “laine” and the meaning of it is wool.