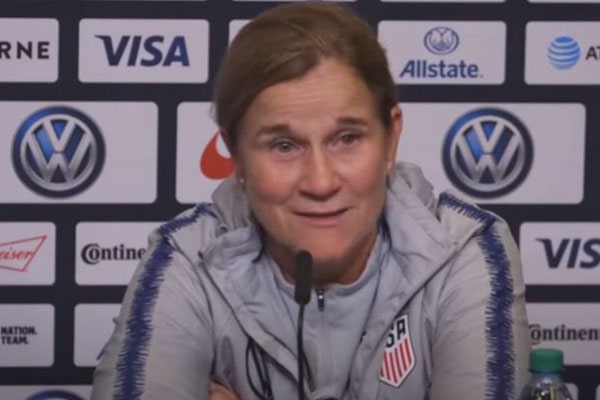 Jill Ellis is one of the most successful coaches in the USA, Image Source: Social Media.

Jill Ellis, born Jillian Anne Ellis in Portsmouth, England, is an English-American soccer coach. She was the head coach for the United States women’s national soccer team from 2014 to 2019. Under her tenure as a team coach, they won two FIFA Women’s World Cups in 2015 and 2019. She is also the second coach to win consecutive World Cups.

We all know Jill is an excellent coach as she is known for being the first coach to win two Women’s World Cups. Besides being a successful coach, she is also a family person. She has a daughter with her wife, Betsy Stephenson. Now, let’s learn more about Jill Ellis’ daughter, Lily Ellis, and her whereabouts.

As mentioned before, Jill is an excellent coach in the field and an excellent mother in her house. She shares a blissful marital life with Betsy Stephenson, with whom she got married in 2013. Together they adopted their daughter Lily Stephenson-Ellis in 2013. They are raising their kid with great love and care.

Lily and her family are living a happy and comfortable life in Palmetto Bay, Florida.

The soccer coach has raised her daughter to be a great human being. Jill Ellis’ daughter, Lily, seems to be a competitive person. In 2016, she was named the American Immigration Council (AIC) Creative Writing Contest winner. Lily, who was a fifth-grader at Coral Reef Elementary School at that time, was awarded a plaque and a cash prize along with her teacher, Yolaluis Perez-Padgett.

Is Vocal About Various Contemporary Issues

Aforementioned, Jill Ellis has raised her daughter to be a great human. Like her mothers, Lily is vocal about various topics like election, racism, and many others. Going through her Twitter, we can see that she has talked about the election and even shared how proud she is to be American. In one post, she mentioned that she is a proud US citizen as people of her generation are protesting to create change in the country.

Jill Ellis is also a huge supporter of the LGBTQ community and speaks about it from time to time and has inspired her little girl to do the same. Since Lily’s mothers are lesbians, this might be the inspiration for Lily to speak up about various issues and the reason behind her being a supporter of same-sex marriage and the LGBTQ community.

Jill Ellis’ daughter, Lily, has always been outspoken about various issues on her social media platform. On her Twitter, she speaks about various issues and remains up to date about different social topics. She also posts various pictures of hers in her VSCO account and has uploaded photos of her having fun with her friends. Going through her photos on the site, we can see that Lily loves to travel and has captured tons of pictures to remember about it.

Apart from that, Lily also has an Instagram account with 875 followers but has not posted any pictures there. However, there is no doubt that Jill Ellis’ kid, Lily, will continue to use her social media handles for the good.

Her Mother Supports The LGBTQ Community

As stated earlier, Lily Stephenson-Ellis’ mother, Jill Ellis, is a huge supporter of the LGBTQ community. In 2019, she removed star left-back Jaalene Hinkle from the World Cup roster. The reason behind the move was said to be a poor workout performance. However, it is believed that the major reason was due to Hinkle’s Christian belief as she refused to travel with the team to Norway and Sweden in 2017 when they wore pro-LGBTQ uniforms, i.e., rainbow-colored uniforms.

Jill Ellis is a phenomenal soccer coach of the USA. Being a daughter of a soccer coach, Lily might also be interested in soccer or any other sports. She might even become the best soccer player and break the record of her mother.

Although Jill is a famous coach and renowned personality in the sports world, she prefers life away from the spotlight. This might be the reason why very few details about Lily Ellis, Jill Ellis’ daughter with her wife Betsy Stephenson, are known. But, we do hope to learn more about her in the coming days.

The name Lily has an English origin which means Lily Flower.