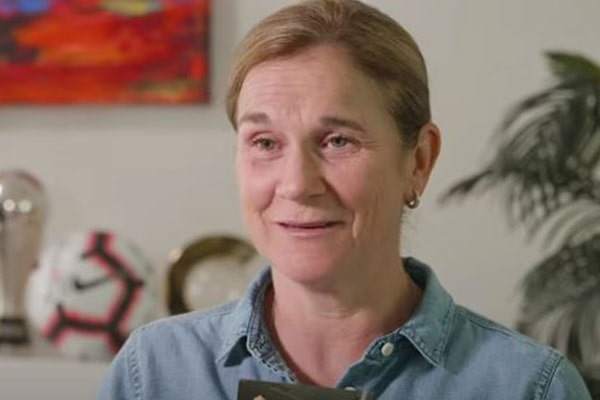 Jill Ellis is one of the most successful coaches in the USA. Image Source: Social Media.

Jill Ellis is an English-born American soccer coach, who coached the United States women’s national soccer team from 2014 to 2019. Under her tenure as the head coach, she led her team to win two World Cups in 2014 and 2019 and became the only female coach to do so. Jill, who stepped down from the positions of USWNT’s head coach, currently serves as an ambassador for the United States Soccer Federation.

Jill is one of the most excellent coaches in the US. Apart from her excellence in coaching, she is also a great wife and a family person. The famous coach shares a blissful marital life with Betsy Stephenson. They also have a daughter together. Now, let’s learn about Jill Ellis’s wife and their love life.

Jill Ellis’ wife Betsy Stephenson grew up in Kansas. She went to the University of Kansas, where she used to play volleyball. After her graduation, she became the associate athletic director of the school for four years. Then she worked at UCLA and began working as the director of athletics and recreation at Emory University. Just like her wife, Betsy also shares an interest in sports and athletics.

As stated earlier, Jill Ellis and Betsy Stephenson share a blissful marital life. The lovely duo tied the knot in 2013. It is quite surprising how they got married two years before same-sex marriage was legalized in the United States. Jill and Betsy met at UCLA. Both of them had not spoken much about how they were able to get married even before same-sex marriage got legalized in the country.

Betsy and Jill are deeply in love with each other and are going strong in their marital life.

Adopted A Daughter Together

Jill Ellis and Betsy Stephenson are the loveliest people who have been married to each other for quite a long time now. In their marriage of 8 years, they share a daughter, named Lily Betsy-Stephenson, whom they adopted in 2013, the same year that they got married. Back in 2020, she was a freshman at Palmer Trinity High School. They are raising their daughter with great love and care.

In 2016, Lily won the American Immigration Council (AIC) Creative Writing Contest. She was awarded a plaque and a cash prize along with her teacher, Yolaluis Prez-Padgett. As her mothers are lesbians, she also supports same-sex marriage and the LGBTQ community.

Jill Ellis’ wife Betsy Stephenson is involved in athletics, just like her. She had started her career by working in college athletic departments. In 2020, Florida International University appointed Betsy as the athletics chief development officer. In her new role, she looks after the development operation which supports the intercollegiate athletics program.

Before working at FIU, Betsy used to work as a senior director of development at the University of Miami School of Medicine from 2013 to 2020. In her career, she has worked in athletic departments of various universities.

Betsy Stephenson supports her wife and daughter. She accompanies her wife to various matches. Betsy was with her wife, Jill Ellis during her last game, the USA vs South Korea game in October 2019. With the love and support for each other, Betsy and Jill’s marital life is going strong.

Apart from being the wife of a popular coach Jill Ellis, Betsy has not made much public appearance. Both of them prefer their life away from the spotlight. Due to this, much information regarding Jill Ellis and Betsy Stephenson’s love life and their family is unknown. But, we do hope to learn more about them in the coming days.