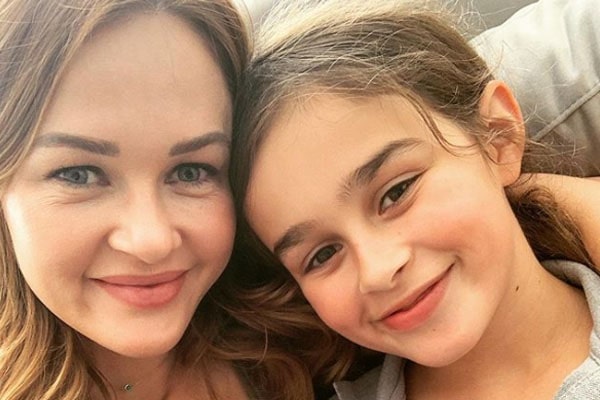 Ambyr Childers‘ daughter London Emmett was born in the year 2010. She had London together with her ex-partner Randall Emmett. Currently, Randall is engaged to Vanderpump Rules‘ star Lala Kent.

Moreover, London is not the only child of the actress. London has a junior sibling named Rylee Emmett, born in the year 2014.

In August 2019, Ambyr Childers put on notice to Lala Kent to stop posting photos on social media of her daughters whom she shares with her ex-husband Randall Emmett. As of now, The Netflix star, Ambyr Childers’ daughter London is nine, and Rylee is five years of age.

London Emmett’s mother Ambyr took her Instagram account to warn the step-mother of her children and even denoted that Lala isn’t the official step-mother of her two daughters. Film producer Randall tied the knot with Ambyr back in 2009. However, things didn’t go well between the two and the former pair got divorced in December 2017.

Furthermore, Vanderpump Rules star Lala seems to neglect the Ambyr’s post as she shared a video selfie on her Instagram Story featuring herself with London and Rylee.

London, born in 2010 is the eldest child of her mother. She currently resides with her mother and younger sister Rylee. Going through Ambyr’s Instagram handle, it seems quite obvious that the cute and lovely family are very much happy and living their life to the fullest.

Not only that but the mother of two seems to recall her motherhood whenever she sees her two daughters. Additionally, the actress Ambyr is dating a mystery man who most often appears to her Instagram post.

Also, Ambyr Childers’ daughter London very much resembles the look of her mother with hazel blue eyes and beautiful hair. The cute and gorgeous London might even follow the footsteps of her mother and be the inspiration to her younger sister. But as of now, she is possibly in her early school.

London is a place name of English origin providing the meaning of “The place at the navigable or unfordable river.”