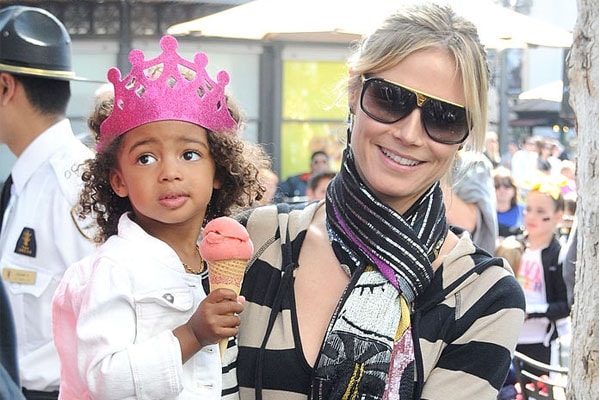 The former host of Project Runway, Heidi Klum‘s daughter Lou Sulola Samuel was born on the 9th of October, 2009. Till date, Lou Sulola is the youngest child of Heidi whom she had her with ex-husband Seal.

Among the four children of the model Heidi Klum, the 9-year-old Lou Sulola Samuel is the smallest of them all. Heidi Klum doesn’t upload many photos of her children, and it seems like she tends to keep them away from the media spotlight. But despite the fact, Lou Sulola Samuel is often spotted with her mother, Heidi at different places.

At times Lou Sulola Samuel and Heidi Klum are seen strolling around the streets of LA and at times seen buying coffees. This shows how much of a close bond Heidi has got with her daughter Lou Sulola.

Not just other times, but during the festive seasons too. During the time of Halloween, Heidi Klum even takes her children, along with her daughter Lou Samuel to buy pumpkins together.

Since Heidi Klum’s daughter, Lou Sulola Samuel is still in her childhood; she has still got a lot of things to explore. We wonder which path shall Lou Sulola choose in the future, be a model like her mother Heidi or a musician like father Seal.

Alongside her mama Heidi, the cute Lou Sulola Samuel also has got a lovely relationship with her mother’s boyfriend, Tom. She is often spotted hanging out with Tom and Heidi.

The name Lou has a French origin. In French, Lou means a famous warrior.

As for the name Sulola, it is an African baby name and is kind of unique.