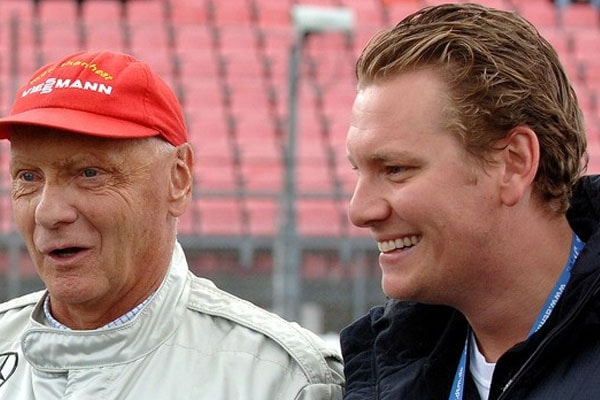 Lukas Lauda is three-time F1 World Drivers’ Champion, Niki Lauda’s son whom he had with his first wife, Marlene Knaus. He was born in 1979. He has got a brother named Mathias Lauda and three half-siblings named Max Lauda, Mia Lauda and Christoph Lauda.

Well, the talented Lukas is currently working as a manager for his brother, Mathias Lauda. Mathias is also an Austrian car race driver like his late father Niki.

Lukas was born to the illustrious Austrian Formula One driver, Niki Lauda, and his former model wife, Marlene Knaus. He works as a manager to his brother, Mathias Lauda. Mathias, who has followed in his father’s footsteps, and is racing as a factory driver in the FIA World Endurance Championship for Aston Martin Racing.

What is Niki Lauda’s Son Lucas Lauda Up To These Days?

Lukas Lauda is busy working as a manager for his brother. Even though Lukas and his brother were born right into fame, Lukas has kept a low profile both in the public domain, and the digital world. Lukas uses Instagram which has been kept on private. He has kept a goofy display picture of himself and an adorable little baby. His brother Mathias is quite an Instagram-er and has even posted some photos with Lukas.

Well, we can see that there is a great deal of love between the two brothers.

The Loving Parents Of Lukas Lauda

As mentioned above, Lukas Lauda was born to parents Niki Lauda and Marlene Knaus. As Lukas is a man of secrecy his relationship details haven’t been revealed yet.

Lukas’ parents Niki Lauda and his ex-wife, Marlene Knaus, met each other in the early ’70s. His father Niki Lauda, considered as one of the sport’s greatest driver’s,  won the F1 drivers’ championship in 1975, in 1977 with Ferrari, and again in 1984 with McLaren. He was a legendary figure in the racing spectrum who passed away on May 20, 2019.

As for his mother, Marlene Knaus was building her career in modeling when she met Niki. Due to Niki’s mammoth fame, Marlene was soon taking in the spotlight as speculations about their relationship began to surface. In 1976, the duo tied the knot and welcomed their first child together in the early 80s, who they named, Lukas Lauda. And just two years later, his younger brother Mathias was born.

Lukas is a Latin derivation of the Greek word Loukas which means, ‘Man from Lucania’