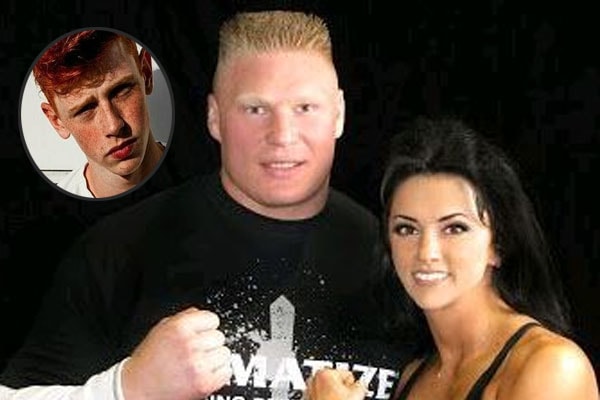 Brock Lesnar‘s son Luke Lesnar was born on  April 10, 2002, in Minnesota, United States. Luke is the son of renown WWE superstar and his ex-partner, Nicole McClain. Luke’s mother Nicole is a professional fitness model.  He has a twin sister, Mya Linn Lesnar and also has two half-siblings, Turk Lesnar and Duke Lesnar from his father’s current wife Reno Mero aka Sable.

Luke’s parents, Brock, and Nicole were in a relationship for some years and got separated in 2004. As for now, the children are living with their father Brock and his current wife Sable.

Brock Lesnar’s Son Luke Lesnar, Set To Be A Wrestler

Brock Lesnar’s son Luke Lesnar is gearing up to join WWE World Wrestling Entertainment. He has been training hard to become a pro wrestler. Plus who knows, Brock could be even giving his son special tips and tricks to be a professional wrestler.

It looks like Luke is very close to Brock as he has been following his father’s footsteps. And one thing is that Luke tends to stay away from the media as much as possible as he rarely uploads anything on his social media.

However, in Luke’s Twitter account, he has claimed that he never had an Instagram and someone is impersonating him again and again. Not just him, but there are people, who are making fake accounts of his sister Mya Linn as well.

Someone is impersonating me AGAIN! What’s worse is that they also made an account of my sister. Please report these accounts, my sister and I don’t have Instagram! pic.twitter.com/mjQEBrIqqJ

Besides Wrestling, the 17-year-old Luke used to play school hockey in his hometown Alexandria, Minnesota. He also loves to listen to music.

Nevertheless, Luke is trying his best for a career in the WWE platform. Also, he indicated that it won’t be long before the WWE Universe sees him inside the squared circle.

The name Luke has a Greek origin which means ‘Light giving’.