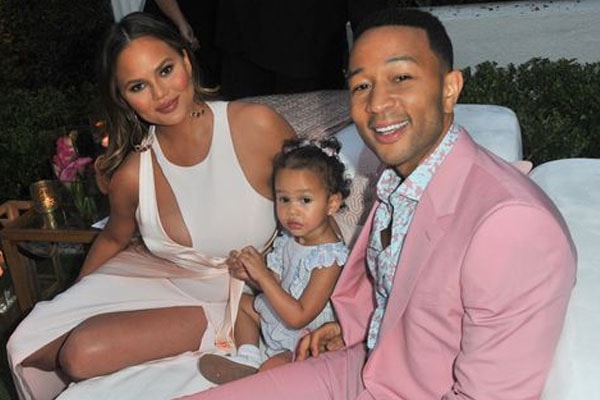 The Ordinary People singer John Legend‘s daughter Luna Simone Stephens was born on the 14th of April, 2016. Luna Simone is the firstborn of John Legend whom he had with wife Chrissy Teigen.

The cute Luna Simone Stephens is not the only one kid of the family. She also has a younger brother named Miles Theodore Stephens.

The 2-year-old daughter of John Legend, Luna Simone has officially started school. And during the first weeks of school, Luna Simone has proved that she is not the one to be messed with. When Luna was back from one of her schooling endeavour, she handed a progress report to her mother, Chrissy. After viewing upon the report, Chrissy asked her little one what happened at the school for which Luna replied; she fell down on her forehead.

Then Chrissy remembered it was back in Bali, so she again asked her tot for which Luna replied that she had pushed a boy. Well, this apparently gives out a warning to all the other kids at school that John Legend’s daughter, Luna is one tough cookie.

It’s not that much of a bigger deal for celebrity babies to have a fan following. But in some cases, there are a lot. Despite not having her social media accounts, Luna has got a massive number of fans on Instagram. She has got many fan accounts which have got thousands of followers. The accounts are based on Luna Simone and mostly are filled with her photos and videos.

Luna Simone Has Also Been Featured In A Music Video

In November of 2016, John Legend released a teaser of his music video “Love Me Now” which with many other people also included his daughter Luna Simone and wife Chrissy Teigen. The cute Luna looked adorable as ever.

Who knows, maybe Luna Simone Stephens might also follow the footsteps of her father John and become a huge musical artist.

The name Luna has a Latin origin in which it means the moon.

As for the name Simone, it is the female version of Simon which comes from a Hebrew name Simeon meaning Hearkening (one who hears.)